Damn you, DVD bargain bin! You appeal to my basest instincts on the way out of the supermarket, forcing me to paw through every last wretched title until my frozen peas have defrosted and my Ben & Jerry’s melted! Yes, I know you’re reading this, evil sales bin... A pox upon thee!

If I had a penny for every time I’ve been hijacked thusly by my local supermarket’s £1 DVD bargain bin, well... I’d have at least 98 pence. Unfortunately, that’s not quite enough to buy any of the bargain DVDs in it (two more visits to go!) but, then, nobody ever said life was fair. If it were, I’d find more actual bargains in that bin, rather than 20,000 copies of a badly animated version of 20,000 Leagues Under the Sea.

Yesterday, however, I found something worth a whole trolley-full of sloppy ice cream. I found a mystery... A mystery called Trilogy of Murder! Here it is on my cappuccino shag pile: 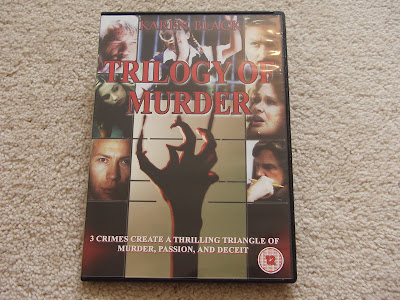 Remember Trilogy of Terror, the 1975 TV movie starring Karen Black as three different heroines of three different stories, culminating in an unforgettable battle with a deadly Zuni fetish doll? Of course you do! Well, Trilogy of Murder features ole Karen in three more tales, this time centred on murder, rather than terror... I mean, I don’t know which is worse – murder or terror – but a trilogy of either is bound to be pretty shocking.

Even more shocking is the fact that I can’t find Trilogy of Murder on the IMDb. What is this, people? 1996?! That just doesn’t happen anymore. Anyway, thanks to some sterling Nancy Drew detective work on the part of Amanda By Night, AiP can point you in the direction of a full trailer for this apparently extremely obscure Russian-American co-production. Go Amanda!

Unfortunately, it doesn’t look like Karen Black appears in all three segments à la Trilogy of Terror, but this disappointment is counterbalanced by the fact that story #2 is a genuine Anchorwoman In Peril mini-movie! Just read this:

“When an alluring television news anchor is pursued by a relentless, resourceful stalker, she has no alternative but to turn to Somov, Sommer and McMillan to restore her life to normal...”

Um... Somov, Sommer and Whatsit...? Yeah, I’m just tuning out all the stuff I don’t understand to concentrate on the key phrases “alluring television news anchor” and “relentless, resourceful stalker”.

What an hilarious entry Ross. You paint such a vivid portrait of the experience. One that I know full well too. I especially have this conversation "Man, this is going to be the shittiest public domain print of this film, scratches, scuffs, edited for content and time, but shit, it's not out on any OTHER label and it's only 2 bucks. WTF, I'll buy it! 6 months later it's put out by a major boutique label and I say again, WTF! I should've waited!

Thanks for your kind words about my publication Ross - and I too am off to Spain come October. Just about my favorite place in the world to go. I always leave Spain ready to tackle anything - it's magical. Hope you had the same effect. Later buddy

Trilogy of Terror is awesome and scary. This movie is scary for different reasons. I can't wait to see what the outcome is...

Have you ever seen The Strange Possession of Mrs. Oliver? Karen made some pretty interesting TV movies in her day...

And thanks for mentioning my Nancy Drew skillz. I kind of have it bad for old Pamela Sue.