Hang on, I’ve forgotten the point I was making, but it’s no wonder I’m confused. Trilogy of Murder, whose DVD cover promised a thrilling, three-part follow-up to Karen Black’s classic TV movie, Trilogy of Terror, turns out to be something else entirely... Something cobbled together from bits of an old TV show called Russkie v Gorode Angelov – or, to translate that into English, Russians in the City of Angels.

And Karen’s barely in it! More on that later, when I launch into a thrilling, three-part discussion of Trilogy of Murder but, for now, let’s marvel at the fact that the cast of Russians in the City of Angels also included, at various points during its twelve-episode run, Eric Roberts, Sean Young, Erik Estrada and Gary Busey. Why none of these managed to make it into Trilogy of Murder I can’t fathom, although the Roberts and Estrada episodes were merged into movie called Border Blues. The upshot of all this is that there’s still seven episodes yet to be shoehorned into cheapo compilation movies, at least one of which I’ll no doubt unsuspectingly purchase under the impression I’m onto an undiscovered sequel to the Sean Young classic, A Kiss Before Dying. *Sigh*

The evil mastermind behind this whole, er, crappy-movie-market-saturating masterplan is one Rodion Nahapetov, who not only created the original Russian TV show but also takes writing and directing credit for Trilogy of Murder, plays the film’s main character, and also contributed the heart-wrenching song that plays over the closing credits. Join in if you know the words: Loneliness is gone, tomorrow is our song, my heart is singing for all it knows...

My own heart sank when Trilogy of Murder opened with a dizzying montage of cheesy clips from Russians in the City of Angels (some of which, in retrospect, may possibly have featured Erik Estrada, I’m not sure). A voiceover introduces our hero, Andrei Somov, a former police officer and “expert in Russian crime” now working for the LAPD. He has two crime-busting buddies called Sommers (played by Lane Davies of Santa Barbara) and McMillan (Pat Battistini), and this Unlikely Trio® will be our friends for the next 98 minutes. This is where the vodka comes in handy. 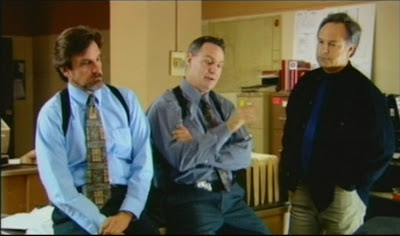 But hold that thought and put down that bottle! It’s time for Trilogy of Murder: Part One – or, to give it its proper title, Case #741b3: The Ring. Bet you didn’t know that’s how they label their files down at the LAPD, did you? Fun and educational, that’s me. Anyhowzers, the only way I can really describe what it’s like to sit through “The Ring” is by asking you to imagine switching on an episode of CSI halfway through, then somehow managing to watch the remainder backwards and in Russian. Oh, and I forgot to mention that you also have a hangover. And the picture’s fuzzy.

“The Ring” appears to tell the story of a murdered schoolgirl and some missing jewellery, although it doesn’t help that it’s told in flashback – which, since we’re already within an anthology movie, technically counts as a flashback-within-a-flashback within a crappy film edited from random episodes of a TV show. I don’t know... I found it all a bit hard to follow, but I did enjoy the scene where a man wearing an apron emblazoned with a giant Russian doll offers the opinion: “I love my potatoes over-fried and well-salted”. You just don’t get much more Russian than that. The ending’s a bit of a disappointment, though: I’m sure real life is full of cases where the guilty parties escape justice, but to have them suddenly emigrate to Russia while the cops on the case all head down to the bar is a little inconclusive in my book. 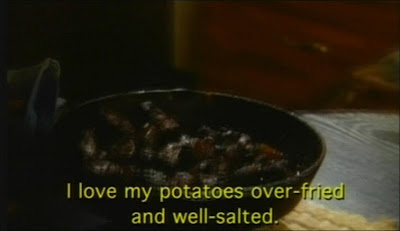 Time for Case #113c2: The Stalker, my favourite of the three tales. Why? Because it’s an Anchorwoman In Peril story – not a particularly great one, I admit, but I’m a pushover for anything involving glamorous TV news ladies pursued by psychotic stalkers.

That’s what’s happening to anchorwoman Nadejda Petrovskava, who works at LA’s smallest – and I suspect only – Russian TV station. Nadejda presents a segment called “Sunny Days”, which counterbalances all that depressing Russian news with some light-hearted human interest stuff. Or, at least, it would be light-hearted if poor Nadejda weren’t being terrorized by the aforementioned stalker, who’s making her life a misery by doing such horrible things as leaving bunches of flowers on her dressing table. The rest of the plot is pure AIP melodrama, but I loved the scene where the TV studio is unexpectedly plunged in darkness and a terrified Nadejda picks up her cell phone and calls the operator(!).

After “The Stalker” is apprehended (there’s no escape to the motherland for this sicko) it’s time for Trilogy of Murder: Part the Third, entitled Case #332 (int’l): The Surgery. You see, where the international cases are concerned, the LAPD are only up to case number 332, and don’t have to use any letters or anything. (Keep on learning there – you never know when you might need this stuff.)

We begin with a Shock Cut to Karen Black. Yes, THE Karen Black! She IS in it, after all. And when I say “Shock Cut”, I mean SHOCK CUT! It’s like something out of Gremlins 2: 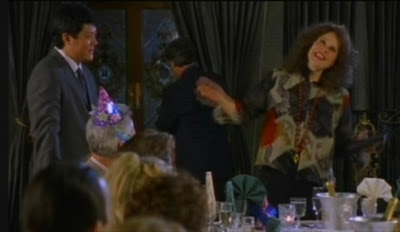 Cue much confused but polite applause and, assuming this isn’t an extract from one of Karen Black’s drunken home videos, she’s playing Detective Sommers’ wife, who’s angry at being stood up at her own anniversary party and threatening to file for divorce. Somov manages to cheer her up by suggesting a holiday – to world-renowned capital of fun, Moscow – and so it’s time for a quick montage of our three detectives (plus Karen) laughing and giggling and walking past the Kremlin, having a wonderful time. Oh, almost forgot, there’s also a crime to solve, this time involving arson, insurance fraud, and a little girl who needs a life-saving operation.

So there you go... Trilogy of Murder. It’s not really a trilogy, it’s not related to Trilogy of Terror, and it’s not very good. Don’t watch it if you’re a fan of anthology movies because chopping up TV episodes and sticking them together does not an anthology movie make. And don’t watch it if you’re a fan of Karen Black, either, because she’s only in it for a minute and a half. In fact, I can’t really think of a reason why anyone would want to watch it. That’ll teach me for rummaging round in the bargain bin at Tesco. Pass the over-fried potatoes, please.

Oh my god. I'm SO glad YOU saw this instead of me! It sounds horrible. But funny... you made it sound funny.

And please tell me what is Karen wearing in that still?!? Btw, if you ever get a chance to see Ms. Black in person... look at her feet Just do it...

On a sidenote, I actually had the pleasure of meeting Sean Young a couple of years ago and she was really nice and absolutely stunning in person. I do love her so.

It occurs to me that I haven't checked to see if you've reviewed the Seduction, which is like AiP with whipped cream.

After reading this post and your followup, I want to see this! Especially knowing it's from a Russian TV show. Too bad it's 100% Baldwin Free, though.

I love Karen Black. Imagine my jealousy when a few years ago my mom, who works as a nurse in a small town nearby, asked me: "Have you heard of Karen... uh, I think it's Karen Black? The actress? I met her the other day." GAH! Turns out the cast of an indie needed physicals for the production's insurance, so mom met Karen and several other extremely famous actors while doing their physicals.

OMG! Somehow I managed to respond to your suggestion by writing an entire review of The Seduction, yet neglected to ask you what it is about Karen Black's feet...?