Oh PLEEZE! Just when you think you’ve got something cleared up, back it comes again, bringing with it that familiar irritation, that burning sensation...

Yes, I’m talking about the burning desire to uncover the truth behind yesterday’s irritating movie, Trilogy of Murder.

If you’ll remember, the film isn’t listed on the Internet Movie Database, the reason being that it’s not a proper film at all, but rather a compilation of episodes from a Russian TV cop show that starred, among others, Karen Black, Erik Estrada and Gary Busey. One person it didn’t star, however, was Daniel Baldwin. And I should know because I sat through it, and I’m very sensitive to Baldwins. So what, then, is Danny-boy doing on the DVD cover of this Asian release? 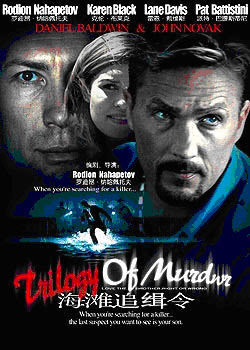 Oh, Trilogy of Murder, still you continue to vex me, though you’re hardly worth the effort. So let’s turn our attentions instead to the upcoming would-be wonders of Shark in Venice, which definitely does star a Baldwin – Stephen, to be precise – and is set for release on DVD in the UK on 6 October:

Were my pants this wet when I sat down?
Posted by Ross Horsley at 23:59