A great big bag of almosts – that’s the only way I can describe The Strangers. It’s not a bad film – in fact, it’s almost a good one – but, for everything it almost gets right, there’s something so frustratingly off, you almost want to switch the damn film off. 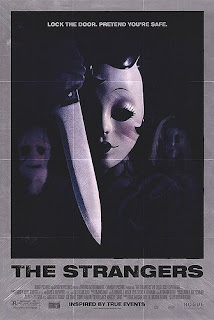 Plot-wise, The Strangers is almost a remake of the 2006 French frightener Ils (aka Them) and is almost certainly inspired in part by Funny Games. Of these home-invasion horrors, Ils is the one that I find the most clever, disturbing and accomplished; Funny Games, whether you’re watching it in its Austrian or American incarnation, is itself a game rather than a film – and one that chastises you for playing by the rules it sets out for you. In other words, it’s a big ol’ cheat. (The Strangers also cheats, in ways we’ll come to in a minute.)

I’m actually surprised The Strangers lasted as long as it did in cinemas, since it’s the kind of movie that bad word-of-mouth should’ve killed in one week flat. That’s not to say it deserves widespread scorn, although no one leaving the screening I attended seemed very impressed, but it’s certainly no crowd-pleaser either. Au Cointreau™, it’s got a heavy, almost heady whiff of cinematic suicide about it, from the dangerously quiet opening twenty, to the equally understated and divisive ending. Now, I’m all for films that weave you carefully into their world, but The Strangers had simply lost a good portion of the audience I watched it with by the fifteen-minute mark, and even I – yes, slasher-loving, anything-forgiving I – felt myself consciously feeding it lengths of attention-span, hoping it wasn’t going to use them to hang itself anytime soon.

For countryside-dwelling couple Liv Tyler and Scott Speedman, it’s with a knock at the door that things start to get nasty. Strangers in masks nasty. Strangers in masks with knives nasty. And pretty soon, they’re hiding in closets, running through the woods, twisting their ankles, and doing all manner of things you don’t expect to find yourself doing at on a quiet morning in the (outer) suburbs. It’s actually quite gripping, at least until the movie’s two main methods of cheating start to grate on you:

Cheat 1: Pointless Stalking. This is another “almost” thing... The strangers here prove highly adept at almost catching our much-terrorized couple, creeping up behind them or lingering fuzzily in the background, before vanishing in the next shot. It’s all very eerie until, after the third or fourth time they do it, you start to wonder why they’re doing it, exactly. The victims aren’t usually even aware of their pursuer’s presence before they disappear again – meaning that the strangers can only really be doing it for the benefit of the audience, to provide a creepy shot for the trailer or whatever.

Care to test out the theory? Take a look at each still from the film below and guess which one represents a scene where the scary-masked stalker actually does something to the victim... 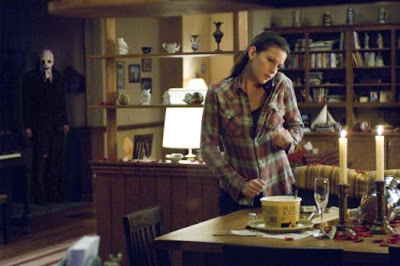 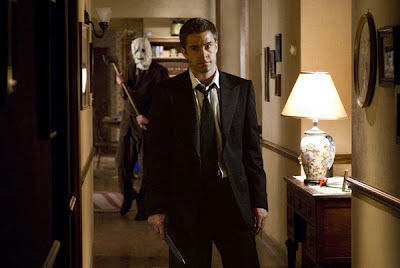 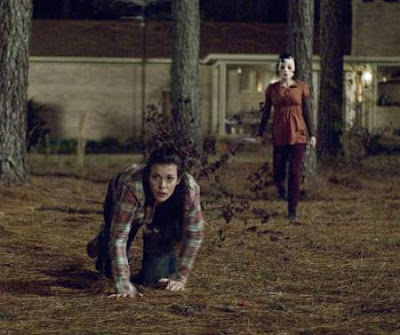 The answer... None of them! They never do anything, remember?! All in all, it’s just not fair horror.

Cheat 2: Major Doofus Moment. A doofus moment is when a character does something blatantly stupid just so the script can get them into a dangerous situation. Y’know, like when Sigourney Weaver goes back to rescue the cat in Alien. Or when she agreed to star in Snow White: A Tale of Terror. Now, I don’t actually mind a doofus moment or two if it means a Terrifying Fight For Survival or something. But what I don’t like is when a character who’s previously proven themselves quite smart (or at least highly rootable-for) goes and has a moment so doofussy, so completely out-of-character, it’s equivalent to them turning to the camera and giving you the finger for allowing yourself to believe in them in the first place.

Thanks to the script, Liv Tyler has a majorly mood-breaking doofus moment about halfway through The Strangers. After successfully evading the attackers for most of Act 2, she apparently decides that the best course of action is to wait for her boyfriend on the porch while he goes off for help. Yes, she’ll just have a little sit down, thank you very much. All that running and hiding was a bit tiring. Okay, we know that the strangers have already been in the house, thus compromising its security as someone in 24 might say, but still... anything’s better than sitting on the fucking porch! Doofus!

This is all doubly annoying (perhaps even three times as annoying – yes, that’s 300% more annoying, statistically speaking) because I actually thought Liv Tyler rocked this movie, creating a character who’s not entirely likeable but whom you’re still entirely able to root for – almost like a real person, rather than a standard woman in peril.

So there we have it, anyway: proof that writing good characters, allowing a story to build naturally, and not being a remake does not always constitute a recipe for success. I sincerely hope that the next movie I see is a “reimagining” of Suspiria starring Miley Cyrus. It’s a dead cert. Almost.

I totally enjoyed this movie. I get what you're saying, but I felt the overall effect was creepy and I loved a lot of the more suspenseful scenes.

My big complaint was not so much why are they walking around being scary without the benefit of the victims even realizing what is behind them but more that the killers (who we see are newbies) are REALLY friggin' good at what they're doing (that was a super long sentence!). They totally anticipated every step the victim's will take and you're all "How would they know that?"

It's like Haute Tension in a way. Like, personally I thought the twist was so unbelievable and stupid, but the first 2/3 were so good, that I decided to just let it roll. I'm cool that way. I think that was my feeling here (although I agree with the original poster about the ending of the Strangers - dumb).

And for me, The Strangers was Open Water on dry land. Another film about how people in a disillusioned relationship will act when they know something dire is going to happen (like all of the sudden they still really love each other, basically because they think they are going to die and they try to make what went wrong seem like it went right). That theme is a bit stronger in Open Water, but I felt it here too.