It’s always a bit of a shock when you just love a film that everyone else just hates. What on earth did you see in it? Are you perhaps too easily pleased? Might you, in fact, be... wrong?

If the film we’re talking about is one that everyone else truly hates, then at least there’s the “extreme reactions” defence – i.e. the movie obviously provokes strong reactions in people, and you happen to be one of the lucky few who respond to its director’s deeply personal vision. What really is disconcerting, however, is when you love a film that most other people seem to find simply bland and mediocre. Which seems to be the case with the 1987 thriller Dead of Winter, as you’ll see if you read the associated reviews over at the IMDb.

It’s the story of Katie McGovern (Mary Steenburgen), a somewhat-struggling actress invited to an upstate mansion after a successful audition for the mysterious Mr Murray (Roddy McDowall). Apparently, she’s needed to replace another actress who’s walked off the set of an independent thriller, leaving the crew in the lurch. The reason Katie’s perfect for the role is because of her close physical resemblance to the movie’s temperamental former star. With a bit of luck, she can step in, finish the shoot, and save the project completely. 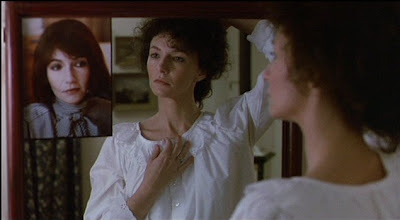 Or at least that’s what she’s been told... Of course, Mr Murray and his movie producer friend, Dr Lewis (Jan Rubes), have ulterior motives for bringing her to the manor. And Katie’s about to find out that it’s never a good idea to show up at a spooky old house, dressed up as a missing woman in the middle of a vicious snowstorm...

So what’s everyone else got against Dead of Winter? Well, okay, it’s not the most fast-paced of films, and you’ll probably figure out what’s going on a while before Katie does. Likewise, you’ll probably end up screaming at her to just run! or at least put a frickin’ coat on! before deciding to wander out into the blizzard for the sixth time. In any case, I can think of at least three good reasons why I love this movie:

REASON 1: I’m getting old. As a horror-loving kid growing up in the eighties, I subsisted on a steady diet of late-night TV movies about women trapped in remote mansions on dark and stormy nights. Obviously, most of these had been doing the rounds since the 1970s – but, hey, this was before satellite channels existed and I wasn’t allowed to rent video nasties, so I had to get my horror fix somewhere! Dead of Winter is basically a late-eighties take on the genre, made on a decent budget by a fairly heavyweight director (Arthur Penn). I wouldn’t go so far as to call it an update as such (in fact, it’s pretty old-fashioned even when compared to some of the 70s TV stuff) but what can I say? Other than: I’m getting old. 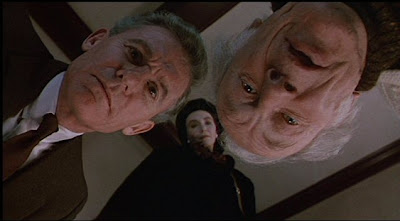 REASON 2: It’s set in a lovely big house – or, to put it another way, I’m getting old. Yes, you reach a certain age and, well, believe me, you just enjoy looking at lovely big houses and nice dresses and shit. I think that’s why old people are always watching costume dramas. And the house in Dead of Winter has a log fire and some stuffed polar bears and – oooh – a player piano (one that’s hooked up to a character’s heart monitor, no less!). Like The Exorcist and The Hand That Rocks the Cradle – two other horror films set in lovely big houses – Dead of Winter cleverly uses the geography of its location to scare you. An hour in, you’ll know exactly where every staircase leads, where the best hiding places are, and whereabouts you’re likely to get caught while trying to sneak to safety. Naturally, Dead of Winter pays off with a hair-raising climactic chase from the bottom of the house right up to the dark and cobwebby realms of the attic. Eek!

REASON 3: I fucking love Roddy McDowall – or, to put it another way, Yes, okay, I’m getting old. I think I’ve already mentioned my love for the man. I’d watch anything he’s in. Why? Is it the clipped British tones? The sinister sparkle in his eye? Or the fact that he seemed to be somewhere in his late-fifties for more than four decades? What I wouldn’t give to look like Roddy when I’m a prissy fiftysomething. Which won’t be long if I carry on acting like this.

Anyway, despite the longish build-up, I think the thrills in Dead of Winter are pretty nicely timed: a few nasty shocks precede a couple of violent outbursts and, before you know it, the bodies are piling up and the chase is on... Good job I brought my walking stick then.

I don't think you're getting old at all (and you're a few years behind me so if you are - shhhh!). I mean you like claustrophobic (sp?), stylish settings and decent mystery? How dare you! The kiddies could take a lesson!

I find that the older I get, I do like costumes, but moreso the "costumes" of the 60s - 80s. Since I've got a pretty nifty Charlie's Angels wardrobe started, I've been paying a lot more attention to the turtlenecks. Again, it's all about style. Just wait until I can finally rock the Kate Jackson look. Hey, we all need a goal!

To put another person in your corner, my boyfriend likes this movie too. We have it and I know I've seen bits of it, but I should really sit down and give it a go. It reminds me a bit of Curtains based on your description, but I could be wrong (it's been eons since I've seen that movie too!).

There is no such thing as right or wrong when it comes to an opinion about a movie. All opinions are subjective. I just watched Dead of Winter this afternoon as part of my journey through all of Arthur Penn's films for my blog and hope to have piece on it posted for tomorrow. I'm with you. I thought it was great fun and the reviews at the time of its release were much too hard on it.