Well, it’s the new year here at Anchorwoman In Peril! – in the same way I expect it might be new year everywhere else. So, without further ado, Happy Two-Thousand-Oh-Eight! And, yes, I’m aware I didn’t actually get round to wishing any of you a happy Christmas, so here’s a belated greeting for that one too: Merry Christmas! Ho ho ho! 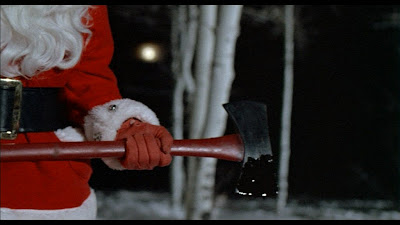 In previous years, I’ll admit I’ve found myself alarmingly loyal in the yuletide movie stakes to my two perennial favourites, namely Scrooged and The Muppet Christmas Carol. But Silent Night, Deadly Night offers pleasures above and beyond those two. There’s all the festive fun of The Muppet Christmas Carol mixed with the, well, frankly rather nasty tone of Scrooged – plus, oh, a deranged, Santa-suit-wearing psychopath murdering promiscuous teens with cries of “naughty!”. Is there anything you’d rather see at Christmas time than that? How about a deaf priest dressed as Santa being accidentally shot in front of a group of orphaned children? Ker-ching, I say! Throw another humbug on the fire! Or whatever.

Silent Night, Deadly Night is so outrageous in its portrayal of holiday hell that your own struggles with family visits and burnt turkey will seem like stocking fillers in comparison. We’re introduced to Billy, a little boy who hates Christmas so much that he traumatizes his kiddie friends with drawings of decapitated reindeer and punches a Santa Claus off his stool when asked to sit on the man’s knee. Why this hatred of all things Kringle? Well, a few years ago when Billy’s family were driving home for Christmas (just like Chris Rea) their car was stopped by an armed robber in a Santa suit (unlike Chris Rea) who proceeded to shoot his dad dead. Then this Santa-from-hell ripped off Mommy’s blouse, attempted to rape her and, as if that wasn’t enough, slashed her throat. Talk about your road to hell! Yes, it seems safe to say that Billy has issues with Christmas. And I have some with Chris Rea. 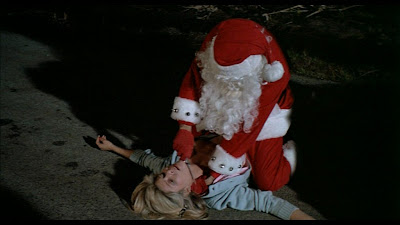 Billy and his baby brother end up in an orphanage, where things don’t really get a whole lot better. Mother Superior isn’t what you’d call sympathetic to Billy’s plight, and it’s drummed into him from an early age that sex is bad and punishment is good. Obviously, things don’t bode well for Billy’s transition into adulthood: when he’s forced into a Santa suit for his Christmas job at Ira’s Toy Store, something in the strapping 18-year-old just snaps. And we’re not talking brandy snaps, either. It’s a full-scale psychosexual bad-Santa meltdown – and you wouldn’t want to be on the not-so-cheery fellow’s naughty list in this little town...

If all that sounds a little mean-spirited and nasty, well... it is! But Silent Night, Deadly Night clearly doesn’t take itself too seriously. I’ve heard that John Waters is a fan of that other Christmas slasher Christmas Evil, but wouldn’t be surprised to learn that there’s a soft spot in his heart for this festival of bad taste too. From the imaginatively conceived slayings (including impalement by antlers and strangulation avec Christmas lights) to the nightmares before Christmas endured by just about every child character in the film, there isn’t a festive motif that isn’t thoroughly trashed by the movie. And, as for the medley of freaky songs, let’s just say that “Santa’s Watching, Santa’s Waiting” is a creepy highlight. Not to mention delightfully catchy.

Only 351 days to go until I can watch it again!

I'll admit, I watch this movie EVERY Xmas, come hell or high water. It's so delightful in it's mean-spiritedness (I think I made a word up!) and is addictive.

They take a lot of time building up Billy's character and it works. I'd of gone nuts too! And Mother Superior. Geesh. I just read that the actress passed away. I keep meaning to do a little write up on Retro Slashers, so I should probably get to that. She was just amazing and utterly terrifying.

And of course, LOVE the review too!

I got lots of love in my heart and am totally amazing that way! :)