The Killer Next Door

I always felt sorry for poor Winnie Cooper in The Wonder Years, sharing a neighbourhood with the interminable Fred Savage. In 2001’s The Killer Next Door, she has an even worse problem... The two creeps who’ve moved into the big old house beside her aren’t just annoying – it seems they also want to kill her.

While we’re at it, then, shouldn’t that title be The KILLERS Next Door? They do after all come as a pair, and one of them is Tobin Bell, the self-righteous serial killer of the Saw movies. But it’s a moot point, anyway, since this low-budget thriller is known as Good Neighbor in the States, although that’s actually an even less accurate title... Sheesh!

But back to poor Winnie – or Molly Wright as she’s called in this film (Danica McKellar if you want to know her real name). Molly is a student of – something – at Somewhere University... That’s not important. What you do need to know is that she lives in a dorm house with sassy friend Rhea (Christine Horn). And by “sassy”, I mean “constantly drunk and a bit of a slut”. Molly, on the other hand, is a straight-A goody-goody who’s escaped her abusive mom and just wants to get stuck into some studying so she can rise above it all and maybe get a part in Wonder Years: The College Years. 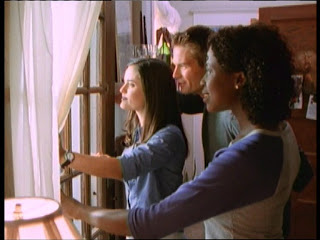 There’s just two things that might get in the way of her sitcom dreams. Firstly, she spots one of her neighbours carrying what looks like a dead body out of the house and – oops – now she’s a murder witness whose own life may be in danger. Secondly, damn, the girl’s got a dirty mouth! “What about protect and serve, motherfucker?” she spits at the police officer investigating her Neighbourhood Watch allegations. Then, when Rhea suggests calling her mom for her, Molly fires back: “Why don’t you go and fuck yourself!” Language like that just isn’t going to endear her to fans of whimsical TV drama.

It doesn’t endear her to the local cops, either, and no matter how many times Molly contacts them about her psycho-neighbours, the lack of hard evidence leaves her looking like a hysterical, foul-mouthed motherfucker. Her only hope is recently-demoted homicide detective Paul Davidson (Billy Dee Williams) who’s been investigating missing persons in the area. Two separate cases have both led him into her neighbourhood recently... but will his tracks lead to Molly before the killers decide to finish her off for good? 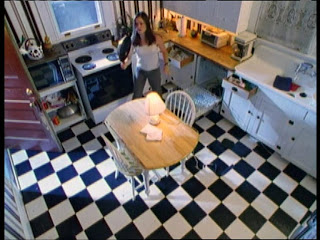 The Killer Next Door works on a small scale, but at least it works. I saw shades of Fright Night in Molly’s fascination with – and fear of – the mysterious older neighbour and his young accomplice. As in that film, whenever Molly finds herself next-door (or the neighbours pop round uninvited) the tension’s pretty high, and some of the action is quite nasty as verbal threats eventually lead to physical violence.

Much of the menace comes from having Tobin Bell as one of the killers. Shorn of the masks, puppets and props associated with him in Saw, the guy is still scary, whether it’s his evil expression: 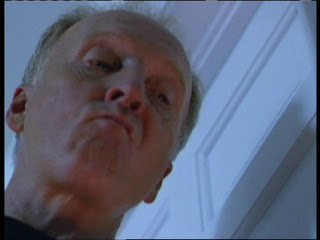 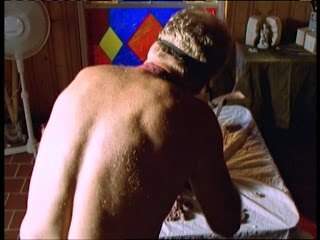 What doesn’t work? Well, you won’t forget this is low-budget. And, as we all know, low budgets buy clichés – so here we get courageous nuns, eccentric pimps, tired cops, jocky boyfriends and alcoholic mothers. Even the “disappearing body” trick gets a look-in, with the added absurdity that the killers deliberately leave the body somewhere with the intention of scaring Molly – despite the fact that lack of evidence is the only thing holding her back.

It’s not great cinema, then, but it’s not bad either. Playing Molly, Danica McKellar isn’t the best actress, but let’s not forget she managed to make us believe it was possible to be attracted to Fred Savage in The Wonder Years. Do I smell an Oscar?

Does anyone know where I can get a copy of this movie. Part of it was filmed in my grandmothers house and I want o see it. Thanks.

Nice house, Alexi! You can get the film on DVD in the UK. It's out of print but there are some very cheap copies HERE on Amazon.co.uk Marketplace. Hope you find it!