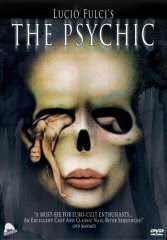 It’s safe to say I’m disappointed with Lucio Fulci’s The Psychic. It probably didn’t help that I bought the DVD full-price, but I’d enjoyed Lizard in a Woman’s Skin (my last Fulci viewing experience) so much that going in blind seemed like a risk worth taking. Instead, all it really ended up taking was 97 minutes of my time... Time I could’ve spent recycling energy emissions or sweeping up my carbon footprints or something. Because I care. You hear that, Mr Fulci? You betcha by golly wow, I do. So the next time you make a crappy movie, just remember the effect it could be having on the environment.

Anyway, the reason The Psychic didn’t really work for me is because it’s a movie that hangs almost entirely on a twist. And, if you figure out where it’s heading early on, there’s not much else – other than a talky police investigation – to keep you particularly intrigued. Added to this, its characters take so long to understand the meaning of basic plot points that it’s often a case of frustration rather than suspense, while the twist itself is telegraphed almost from the start.

But what a start it is! Little Virginia is at school in Florence when her mother decides to commit suicide (it’s never explained why) by throwing herself off a cliff in England. Being as psychic as the title suggests, Virginia manages to “witness” the event through her mystical mind’s eye, and is treated to some gruesome close-ups of her mother’s face smashing graphically against the rocks on the way down. Luckily, Mom seems to have morphed into a mannequin by this stage – but still... surely no kid deserves to be subjected to any kind of Fulci gore effect before the age of twelve. 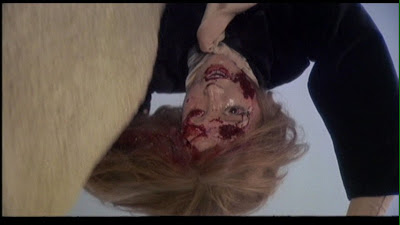 Twenty or so years later, Virginia is a happily married interior designer played by Jennifer O’Neill (whose previous credits, Futz! and Whiffs, make me want to reach for the Febreze). One day, whilst driving Freudian-style through a series of dark tunnels, Virginia experiences another vision – this one culminating in a woman being bricked up behind a wall. And wouldn’t you just know it? When she decides to renovate a house owned by her husband, something about one of the rooms – and, more specifically, one of the walls – looks a little familiar. A few hard whacks with a pickaxe later and Virginia is face-to-face with, not only some expensive property damage, but also a human skeleton that’s been long-hidden behind the bricks...

So far, so spooky, but it’s here that “spooky” turns to the aforementioned “talky”, and the next hour consists of Virginia laboriously piecing together some tenuous clues that eventually (and I really do mean eventually) lead her to the identity of the homicidal bricker-upper. Of course, this being a Fulci flick, there’s also a lot of close-ups of eyes. A lot. Don’t play any sort of drinking game that involves taking a swig whenever there’s a shot of someone’s staring eyes, or you’re likely to die from alcohol poisoning. That’s if the boredom doesn’t get you first. 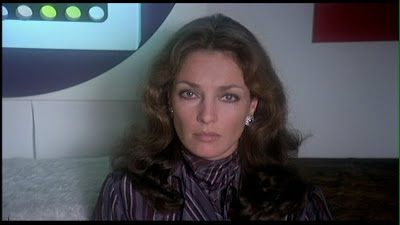 Fulci can pull off a great climax – just look at the amazing extended chase that tops off Lizard in a Woman’s Skin or the fever-dream frenzy of The House by the Cemetery’s finale. Here, however, while you could reasonably argue the case for a suspenseful thirty-minute climax, in reality it’s taken at such a slow pace, it’s no wonder it takes half an hour to play out. The final scene is pretty tense, though, I’ll give you that.

Ultimately, then, The Psychic isn’t a patch on Lizard in a Woman’s Skin. It mightn’t be a fair comparison (and I don’t know why I’m so intent on it, other than the fact that they’ve both received recent DVD releases) but for me it bears out. Simply put, if you want thrills, mystery and the unique kind of cinemadness Fulci excels in, stick firmly with the Lizard.

I love your writing. I'm so a fan of Anchorwomen in Peril. I think I found you by looking up Eyewitness with Sigourney, the cover of which has made me want to rent it for what, 25 years now. I saw The Psychic on TV with a neighbor when I was a kid, don't remember it and now don't want to see it, except for the tantalizing twist. Your writing made me laugh and I had to say hello.