Phantom of the Mall: Eric's Revenge

Folks just don’t know a good title when they see one. Take this DVD cover for instance:

The “revenge” part I can handle. But couple it with the word “Eric” and I stop thinking of horror movies and start thinking of the school geek peeing on your packed lunch because you called him “nerd-face” on the bus.

No, this film’s proper onscreen title is Phantom of the Mall, which is entirely better and seems to me to strike the right note between junky and creepy, much like the film it describes. Why they didn’t just go with that title for the DVD cover I’ll never know. (Okay... technically the onscreen title is Phantom of the Mall: Eric’s Revenge, but can we just put that subtitle behind us and move on?)

Welcome to the Midwood Mall. By my calculations, it’s THE Coolest Mall In The World! Don’t believe me? Well, take a look at this... It’s got a resident pianist: 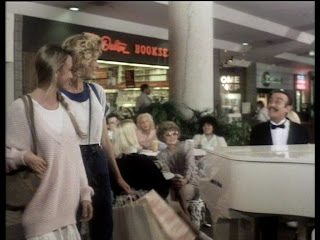 And Pauly Shore works on the frozen yoghurt counter: 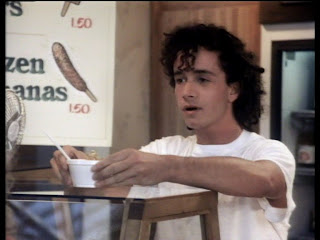 And there’s a shop that sells bombs, which may or may not come in handy for a plot-point later on: 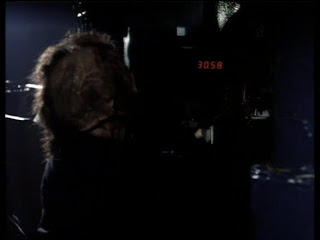 And the changing rooms have no curtains: 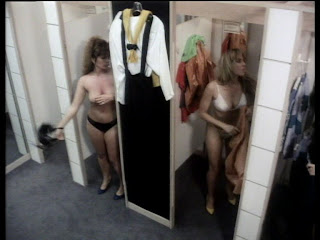 And Morgan Fairchild is the mayor and declares it officially open: 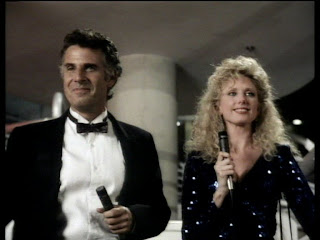 And there’s about 60,000 miles of dark, dingy tunnels running around it – even though it’s brand new! And who should be occupying these crumbling recesses? Well, none other than Eric Matthews, the kid from Boy Meets World Phantom of the Mall himself.

Y’see, Eric used to live on the site of the mall, back when it was all houses. But then some nasty property developers came along and – one suspicious fire and an Extreme Makeover later – it was “bye-bye boring domiciles” and “hello shopping paradise”. And Eric hasn’t been seen since his house burnt to the ground with him apparently trapped inside.

One girl who shouldn’t be happy with the situation is Eric’s former girlfriend, Melody Austin (Kari Whitman). But it’s been a year and – you know how it is – a girl has to move on, and soon she’s, like, totally getting a job as a waitress at the new mall and everything. Yay!

Someone’s not happy, however, and he’s killing members of staff with alarming frequency, whilst poignantly wearing a mask made from a cracked mannequin’s face. One victim is forced forehead-first through a fan; another meets a cobra in the john; and yet another finds himself sucked into that scary bit at the top of the escalator where the metal teeth munch down on the steps. No wonder Phantom of the Mall boasts “special effects from the man responsible for The Kindred” (yes, that’s a direct quote from the back of the box). Except there aren’t really any special effects. But still, the deaths are plentiful and imaginatively conceived.

The box also promises “extremes which propel this story beyond reality and into fantasy realms of chilling horror and explosive action in this multi-million dollar production”. While I’m not sure about that, I will say that this multi-million dollar production is really good fun. I enjoyed it more than the perfunctory killer-robots thriller, Chopping Mall (1986), and just maybe even more than that other, classier mall-set slasher, The Initiation (1984). Part of this probably comes from the fact that, unlike those other films, much of Phantom of the Mall occurs while the mall is actually open, which means there’s loads of transfixing time-capsule footage of late-eighties retail culture. (What do you mean you don’t watch horror films for that?) The shops, the clothes, the extras... the moment when Morgan Fairchild is impaled on a scale model of the mall... Oops, sorry, I’m getting a bit carried away. Don’t want to spoil anything. 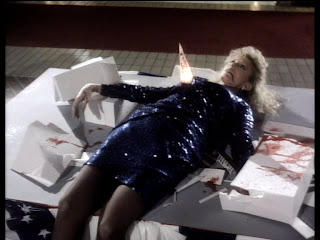 Oops! Anyway, Phantom of the Mall is highly entertaining if you don’t mind the rather bloodless kills and lack of surprises – which it makes up for, in any case, by always having something going on and never trying to be anything other than trashy fun. I only wish I could’ve seen it at the mall on a Saturday night back in 1989. Now that would’ve been rad.

That's too bad - it sounds like your original take had a lot more bite, and I for one would've welcomed that. Here's hoping you get a creative role in the (inevitable?) Platinum Dunes remake.

I LOVE THIS MOVIE. God, I love it. I love Derek Rydall and I love this movie. Did I say that? Well, I'll say it again... love this movie! I have a review for this on a now defunt website and now you have inspired me to find a new home for it.

I love to see love for this movie!