I want to tell you that Shark in Venice is good. That it lives up to the promise of its title. That – I don’t know – it’s better than Shark Attack 2 or something.

Take a look at this scene from around halfway through, when Stephen Baldwin’s character is shark-attacked while diving in the canal: 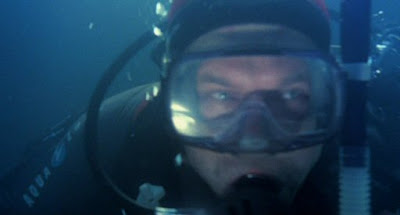 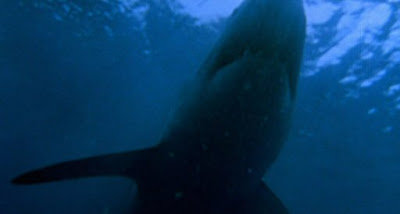 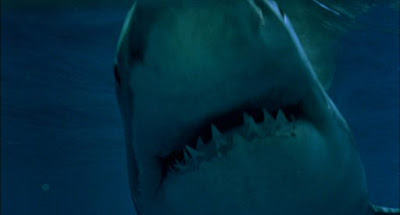 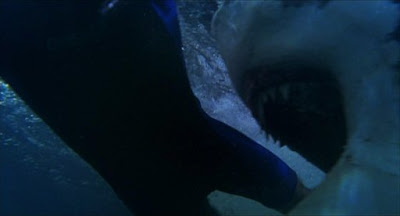 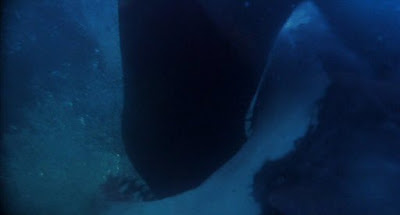 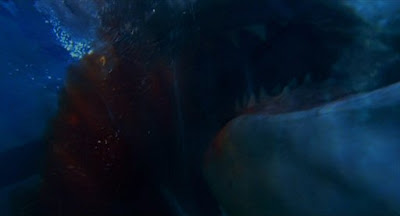 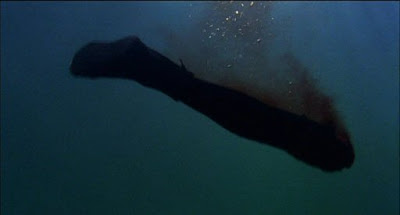 I’m sure you noticed that Le Shark seemed to be having a good old chew on Stephen. There’s lots of blood in the water and, oh yeah, HIS LEG CAME OFF. Well, unfortunately, none of the producers seemed to notice this small detail because, in the very next scene, The Littlest Baldwin is happily walking around on two legs again.* Now, I’ve never lost a leg, thankfully, but I’m fairly certain they don’t grow back. At least, not by the next day.

[* There’s a possible suggestion that Baldwin dreamed this whole attack, but he was in the water and he does end up in hospital, so that doesn’t make any real sense either.]

It’s this kind of annoying detail – whether it’s bad editing or filmmaking-by-committee or whatever – that sums up Shark in Venice’s lack of effort in general. Interviewed in the DVD’s making-of featurette, the cast go on about how the movie’s just meant to be undemanding fun for the viewer. But, really... sloppy shark attacks consisting of nature footage, red filters, lots of splashing and incoherent clips from Shark Attack 2? Where’s the fun in that?

Anyway, on to the plot. Stephen Baldwin is – don’t laugh – Doctor David Franks, an oceanography professor with a permanently glazed expression and really bad dress sense. Seriously, it looks like the wardrobe department put in even less effort than the editor: 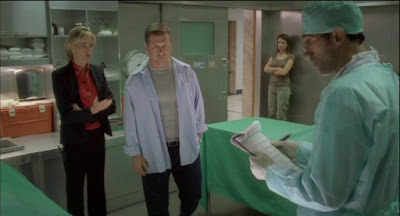 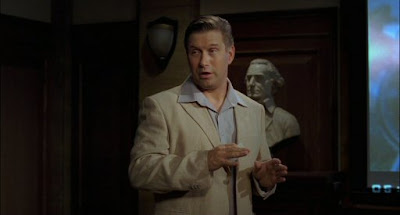 David is called to Venice, where his scuba diving father has apparently been killed in a “suspicious boating accident”. You know, the kind with teeth-marks. David correctly identifies the mangled mannequin as his dad and goes on to the bonus round vows to find out what really happened, with the help of girlfriend Laura, played by Scarlett Johansson’s sister Vanessa. What has all this got to do with (a) Mafia henchmen, (b) rogue sharks and (c) the Medici Treasure? Well, it turns out that (a) Mafia henchmen have released (b) rogue sharks to guard (c) the Medici Treasure. There you go. Someone saved your life tonight.... Well, 90 minutes of it, anyway. So don’t say I never do anything for you.

The problem with Shark in Venice – or, rather, the overriding problem – is that it just doesn’t care. Some digital compositors came up with this: 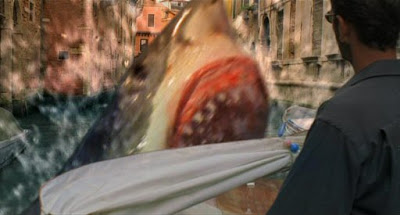 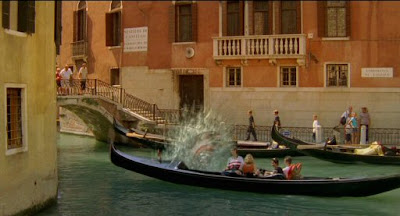 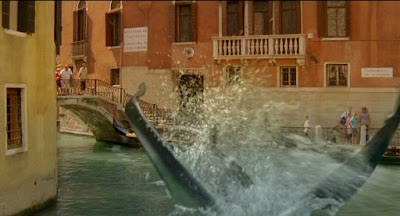 ...so that the makers would have something to show to the investors and hopefully raise enough money to get a film made, and that’s where the interest in filmmaking stopped. As far as Venetian shark mayhem goes, the above scenes are literally everything you get. The budget didn’t even cover the costs of flying the principal cast members to Italy, so all you see is a shot of Stephen Baldwin pointing: 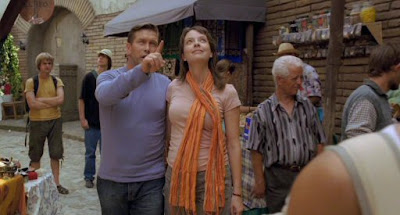 followed by a shaky camcorder shot of this: 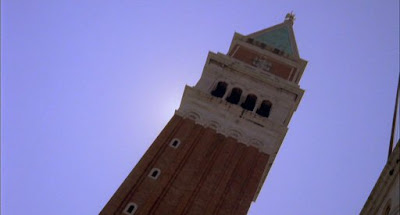 Yes, Shark in Venice hates you. Do not watch it!

As much as I love and trust your opinions, I still feel the need to see this movie. In fact, my boyfriend got me a copy (and it's not available in the US yet. That guy loves me!), and I had hoped to see it soo. I do believe I will feel like you do, but I'm such a sucker for the concept and for sharks. I can't help myself!

You should still watch it. In the right frame of mind, it's probably even good for some chuckles, and it's not exactly boring... but I will warn you it's not as good as Shark Attack 2 ;-)

Hope you enjoy - really I do!

DO U KNOW THE NAME OF THE ACTOR WHO PLAYED THE POLICE CAPTAIN?

Atanas Srebrev is the actor you're looking for, Anonymous. He was also in Shark Attack 3, Raging Sharks and Hammerhead: Shark Frenzy. I guess you could say the man knows a shark from a shallot... Unless he just keeps getting recycled in all the stock footage!