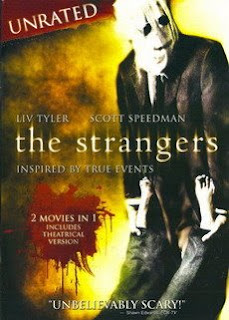 In case you’re in any doubt about the pointlessness of most “unrated” versions of horror films released on DVD, check out this description of the two whole differences between the Theatrical and Unrated versions of The Strangers (but only if you’ve seen the movie already, ’kay? Otherwise, it’s mondo spoilo).

Now, I’m not against including alternative endings on discs – in fact, this one’s even quite interesting. What I am against is labelling them as “UNRATED!” and “Too terrifying for theatres” just because they haven’t been formally submitted to the MPAA and hence don’t have a rating. There’s nothing included in the unrated version of The Strangers that’s any more disturbing than that in the original cut – so, DVD people, give it up and get a new gimmick. We’re not fooled!

While we’re on the subject, oh, how I pine for the days when a horror movie had a coherent directorial vision behind it, rather than a toned-down theatrical release, followed by either a juiced-up DVD version or a selection of redundant deleted scenes edited back in to justify the unrated tag. The Strangers’ DVD release only underscores for me how negotiated the entire affair seemed when I saw it at the cinema. However much I love a little extra unrated nastiness in a film, I respect a little passion and personality a whole lot more.
Posted by Ross Horsley at 23:59

I was jonesing for a post! Thank god you did one! Anchorwoman in Peril withdrawl is nasty!

I am also glad to see a new post on here!

Hated that added in scene towards the end of Liv Tyler waking up and crawling to the phone. Really took something away from the overall impact of the film and it should've been put in as a special feature, rather than being crowbarred in there.