Too Scared to Scream

Too Scared to Scream is one of those 80s movies that’s too nasty to be a mainstream thriller, yet too mired in the conventions of mainstream thrillers to be a proper slasher (other examples might be The Fan, 10 to Midnight and The Majorettes). None of this would probably have mattered if Brian De Palma had directed it – but he didn’t, so the end result here is pretty uneven and uninspired, albeit worth a go if you like slashers. 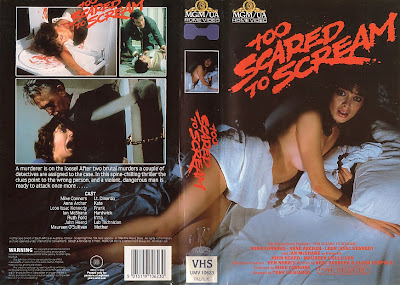 I like slashers. You know that. And I particularly like slashers set in big cities. In theory, if you’re being chased by a killer, it should be scarier to find yourself stuck in the middle of nowhere (like a summer camp in the woods or a remote, abandoned house) but what if you were actually completely surrounded by people, only no one could – or would – help? Now that’s a scary thought. Some flicks that explore this idea cleverly include:

There’s probably dozens of other examples of this freaky film phenomenon; in fact, Joe D’Augustine does a great job of describing it in relation to Argento’s Four Flies on Grey Velvet at his blog, Film Forno. The reason I mention the notion here is that I’d been hoping beforehand that Too Scared to Scream would also tap into it, being set as it is in a New York high-rise – the kind of place where people live piled on top of one another and, if my understanding of Seinfeld is correct, frequently burst in on each other without knocking, not to mention find themselves embroiled in all kinds of humorous scrapes.

As it turns out, Too Scared to Scream does have some nice urban-living scare sequences, employing such things as empty laundry rooms and painfully slow elevators to suspenseful effect. It also has more than its share of crazy shit going down – crazy shit that causes all kinds of pacing problems and, well, just general weirdness that ultimately distracts and subtracts from it as a whole.

Plot-wise, tenants of the aforementioned apartment building are falling prey to an in-house killer at an alarming rate. The cops suspect creepy doorman Vincent Hardwick (Ian McShane)... After all, he’s smarmy, British, and lives with his mother, a paralyzed car-crash victim who, in an instance of that crazy shit I was telling you about, has no scripted lines but is played by Maureen O’Sullivan (in a far cry from her Tarzan days). 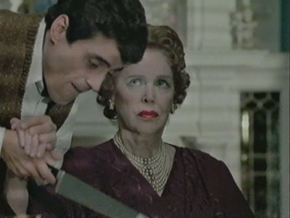 Had your fill of crazy shit yet? No? Well, next there’s our junior detective – and final girl – Kate Bridges, played by Anne Archer (who had also starred in an episode of Mannix ten years previously!). Archer is easily one of the best things about this film, whether she’s cunningly disguised as a bag lady with a fake nose, or jiggling herself crazy in woolly legwarmers as part of some aerobic nightmare set to a pumpin’ 80s beat. Kate also attempts to seduce the blatantly gay doorman by jogging up to him in the park and stopping to stretch her spandex-clad thighs on a bench, just inches away from his face. (I was honestly waiting for his wheelchair-bound mother to slowly roll into the pond in the background.) It’s detective work at its finest... Sorry, no, I meant camp comedy at its finest.

Too Scared to Scream is a slasher with a large dose of mystery and, while the identity of the killer didn’t come as a shock to me, his/her motivation was something I really hadn’t seen coming – even though the clues are certainly there. Another thing I hadn’t anticipated was our heroine’s choice of weapon as she prepares to face the killer at the climax – namely, a telephone receiver. (Well, phones can be deadly, remember!)

With all the 80s horror remakes doing the rounds at the moment, I almost wouldn’t be surprised to see this one plucked from obscurity, even if it’s just to cash in on the caché of the title... 2 Scared 2 Scream, anyone?

All you had to say was Murray Hamilton. I love that guy. I think I have a copy of this movie but never bothered to watch it, or apparently look at the box because that cast is to DIE FOR!

Thanks for this review. Yet again, my interest is piqued! Stop doing that!

It's Josh, formally of Body Horror.
I'm happy to see you have seen Too Scared to Scream Too! Oh...my. >.>

Not a huge fan of it, but was planning to review it at OTH soon. I have the VHS, and it's a rare delight...if, you know, "he totally did it- but wait no he didn't, though i think i knew he didn't all along, or at least I should have known" type flicks are your thing. Damn Hide and Go Shriek has nothing on its ending! :| Meh!

Josh, I'd love to read your thoughts on Too Scared. Agree wholeheartedly with your review of the April Fool's Day remake over at Oh The Horror.

You've got me intrigued about Terror and Black Lace... Sounds like it could be quite the nail-biter...