You have to worry about the sort of mind that watches a film like Transamerica and thinks, “What this needs is tits and gore”. It makes you wonder if there’s someone in the audience of every film thinking that. I mean, I love horror as much as the next horror-lover, but I can also make it through Mamma Mia! without expecting to hear the roar of a chainsaw any moment. (Wait a minute... what’s that buzzing?)

Nevertheless, someone was impressed enough by Transamerica, yet sufficiently unsatisfied with its gore quotient, to want to remake it horror-style. In its heart-warming tale of a transgendered father seeking his son’s acceptance, they saw bloody revenge and lots of naked pole-dancing. In short, they had a vision... A vision called Transamerican Killer! (Later retitled to Switch Killer, presumably because the buzz surrounding Transamerica had died down.)

That someone was writer-director Mack Hail, whom you might recognize as the man who played the killer in Nutbag, Nick Palumbo’s heavily-censored (in Britain) film about a serial murderer stalking Las Vegas. The adage “write what you know” proves true here because Hail’s script for Switch Killer again concerns a killer in Vegas, only this time the twist (and I think it’s actually meant to be a twist in the plot, though I’m not sure) is that this killer is a man in a dress. Look, you can see him/her hovering ominously in the background here: 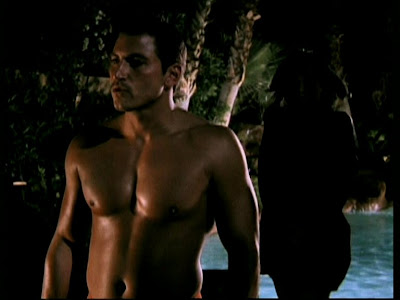 Let’s back up a bit. Why is he in a dress? Simple. Obviously, he’s been rejected by his girlfriend, who left him for another woman, so naturally he sticks on a wig (because wigs can do anything, remember?), twins it with an evening gown, and sets off on a stripper-murdering frenzy on the streets of Sin City. And to think: Felicity Huffman got an Oscar nomination just for wearing a plastic cock.

All of this may make it sound as if Switch Killer spends most of its time in the company of gender-bending Bobby (for that is his name – the Bobby part, at least). This isn’t really true, however, as the main character is actually his former girlfriend, Jamie, played by Cara Jo Basso. As well as lesbian tendencies, Jamie also sports extensive eye shadow: 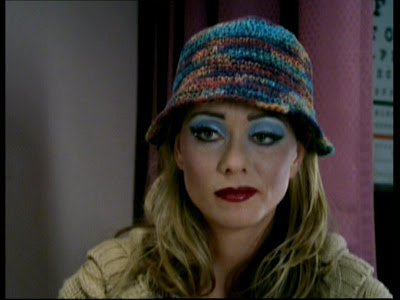 Focusing on a female victim thus nudges Switch Killer away from being another Nutbag-like piece of pure nastiness and further into slasher movie territory, as Jamie goes about her life unaware that her friends and colleagues are being stabbed to pieces all around her (and, in one instance, stabbed then hit by a train – unlucky!). Of course, Jamie and Bobby eventually cross paths again in time for the climax, when the bodycount triples in the space of a few minutes thanks to a clutch of unfortunate partygoers getting in the way, and Jamie discovers she’s quite handy with a chainsaw. (Now, if only there’d been one of those in Mamma Mia!)

You’re probably starting to sense that subtlety isn’t one of Switch Killer’s strong points. In fact, I suspect the makers would’ve called it Sex-Change Killer if they thought they could get away with it. But is the movie as offensive as it sounds? And, more importantly, is it any good?

Surprisingly... yes! This one’s single-handedly restored my faith in the modern low-budget slasher. Sure it’s cheap (some of the sets are terrible) but director Hail manages not to take it too seriously whilst also, crucially, not letting it descend into a complete joke. As a result, it’s sometimes damn funny. (I particularly liked the Casablanca remake that plays on TV and includes the line: “Get your ass on that plane!”) The gore is simple but reasonable, and made more effective by the fact that the kills themselves are well staged, again including some amusing dialogue. But, best of all, Switch Killer doesn’t feel like most of the despicably drossy shot-on-video efforts that have been kicking around since 1999. Instead, something about its bad fashions, largely adult cast, and lack of modern technology actually makes it seem a little more timeless, in the way of an 80s slasher.

The movie’s main flaw – albeit one that doesn’t spoil enjoyment – is that it’s not clear how obvious it’s supposed to be that Jamie’s stalker is actually her ex-boyfriend. Towards the end, it’s treated almost like a plot twist, despite having already been evident throughout, even to the extent that it was referenced in the title. But this is just one bum-note in an otherwise confident – and competent – black comedy/horror.

You had me at Vegas and then lost me at Shot on Video. I have SUCH a hard time with SOV movies. I really do, although I quite liked Boardinghouse... More than I should of, I suspect.

Still, being from Vegas I will have to see this, and I like Nick Palumbo and I want to see Nutbag, so I'm curious to see what the actor did here.

Have you ever heard of a movie called Las Vegas Bloodbath (talk about shot on video!)? I can't recommend it, but I do own it. It's pretty horrible and kind of amazing at the same time.

I wish I knew of other Vegas slashers so I could propose a theme week, but I think you've pretty much covered them all! Damn you Vegas! Make more slashers!!!

I've just been reading about Las Vegas Bloodbath on Bleeding Skull, and all I can say is... wow! As for Switch Killer, it actually doesn't look too bad for SOV - and, no, I can't believe I'm defending something SOV... I hate it too!

The movie was shoot on super 16mm. I know you don"t know the difference because you still have a 13" Monitor. Move up to HD Bitch

No one is answering the really important question:

WHO is the guy about to get murdered poolside in that photo you posted? And has he done *ahem* any other movies?

This Movie was shot on Super 16MM Film, Mack Hail Davis was the Writer,Director. Lions Gate was cheap on the DVD transfers. This movie went on to make over 3M on sales. It is very hard to make a film when you give everything to your Director and he screws everything up. I guess you never get a job again in the film biz. Take investors money, make a crap film, that is what real filmmaking in about.