What is it with 1931 and films I haven’t seen?! First M, now this... Anyone would think I’d been avoiding the year, which is technically true because I hadn’t actually been born yet. But I assure you, 1931, it was nothing personal!

“Listen to them. Children of the night. What music they make...” Yup, I may not have actually seen Bela Lugosi in his most famous role as Drackie O, but I can at least quote his most famous line (as well as the spoofy reference in Love at First Bite, in which George Hamilton says, “Children of the night... shut up!”). I also heard that, at any given moment in time, some TV station somewhere in world is showing this version of Dracula, which means it’s actually on right now (...or even now, if you’re reading this later). So why haven’t I seen it? Well, Bela never struck me as a particularly menacing count. He just seems to lack the stature, the fangs, the sinister sexuality of the Dracula I grew up with, Christopher Lee. In fact, he looks a bit like me in a cape. And who wants to see that?

I’ve also heard the film takes some strange liberties with Bram Stoker’s source novel – like sending crazy bug-eater Renfield off to Dracula’s castle at the start instead of Jonathan Harker (although that’s still marginally more believable than having Keanu Reeves in the role). And then there’s that rumour that the Spanish version, shot at the same time on the same sets (but with different, more Spanishy actors) is actually superior. Is there anything that Dracula ’31 has going for it? Be sure to let me know! 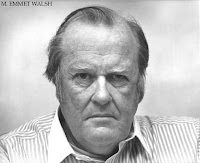 What? You liked this movie? Gah! Tell it to Chud Emmet Walsh.

I've never seen the Spanish version, but I think this version is pretty great. It's creepy and Bela is good.

I have to agree with you on Chris Lee though. Me-ow. Hard to top.

Still, if you're going into the 30s, Dracula, M, and Freaks are probably your best bets.

The Spanish version is on the DVD box set with the Bela version and other various Dracula films. I'm hint-hinting around about getting it for my birthday.

Sounds like a pretty good box set. I'm so intrigued by this alternative Spanish version... Maybe I should've made that the Sham Shocktober film!