Well, it’s not a film of 2009, exactly. It’s a film of 1966, but I saw it for the first time in 2009. Oh, and I’ve actually already seen two other pretty great movies this year (Rogue and Sydney White*) but this one’s on another level entirely. So, okay then, I guess you could say I’ve seen my first truly great movie of 2009... Jeez, just get off my back, will you? I’m trying to tell you about a great movie here!

So, onto Michelangelo Antonioni’s Blowup. It’s a masterpiece. It’s a mystery about a murder that might not be a murder. In fact, it might not even be a death. It’s a movie about mysteries, and a mystery about movies. It’s about what you see, what you think you see, and whether anything can really be seen at all. You see? 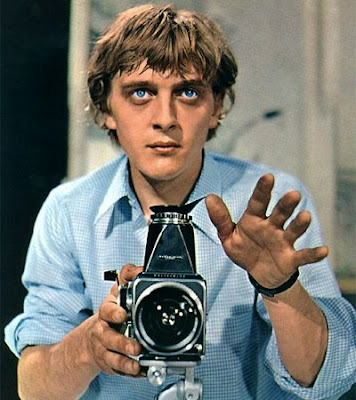 You could talk in circles about Blowup like this all day and, at the end of that day, all you’d be left with is smoke, mirrors and possibly a headache. But it’d be a good headache: the kind that means you’ve been thinking really hard about something meaningful.

I’ve never seen another film quite like Blowup and, in the 42 years since it was made, I’m not even sure there’s been one. Interestingly, two of my favourite directors have made their own reimaginings (to coin a phrase). Dario Argento was purportedly so exasperated by Blowup’s distinct refusal to solve its own mystery that he signed up its star (David Hemmings), cast him in another elaborate enigma (Deep Red), and this time ensured that everything was properly explained by the last scene. Brian De Palma, ever eager to get his homage on, swapped Blowup’s themes of things seen for things heard and came up with Blow Out, which incidentally turned out to be one of his best efforts.

Both of these films are reminiscent of Blowup, but neither is like it. Neither says so much with seemingly so little, nor burrows so deep into your consciousness that you know you’ll never watch movies in quite the same way again. Sometimes, while watching a film, I become aware that it’s not going to be my only viewing of said title, and that I’ll undoubtedly be revisiting it again at some point in the future. With Blowup, I was anticipating that second viewing every step along the way, wandering further into its labyrinth and falling deeper under its hypnotic spell, my only reassurance being that, next time, I’d be that little bit better prepared to understand it that little bit more.

What of that plot then? Blowup sounds stupidly simple. It spends a day and a half or so in the company of a playboy photographer played by David Hemmings. And, by that, I mean he’s a photographer who’s a bit of a playboy, not a photographer for Playboy. This is London, after all. Hemmings, whose character is never named, spends his time chasing skirt (although it often chases him) and taking pictures. He’s buying property in an up-and-coming area full of “queers with poodles” and makes ostentatious impulse purchases, like the giant wooden propeller he picks up at an antique shop while flirting with the sales assistant. Somehow this seems significant.

What’s definitely significant is the strange meeting he has in a windswept public park with a woman (Vanessa Redgrave) who demands that he surrenders to her the film he’s just used to take snaps of her cavorting with her lover. She won’t say why, and he won’t find out why until he gets back to the darkroom and thinks he notices something funny in the background.

I could reveal more but it really wouldn’t tell you anything because this is a film that has to be experienced before it means anything to you. You already know that Blowup’s mysteries aren’t resolved in the usual way – and I’m in two minds about having told you that – but it’s a fairly famous aspect of the film, which you may already be aware of. It’s also the kind of thing that might ordinarily put me off a film, so I mention it both to warn you beforehand and reassure you that, thanks to a few twists, Blowup’s incredibly evocative openness to interpretation will actually enhance your viewing of it. It’s that clever.

Don’t pass up Blowup because you like your mysteries to come with solutions. You’ll never find a more intriguing one.

I have always wanted to see this movie, and now you're re-sparked my interest. I do love David Hemmings. He has a real haunting quality to him and that always adds to whatever film he's in.

I liked DePalma's Blowout very much, especially since it didn't pander to happy endings. Definitely worth a rewatch as well.

Good Lord how I love this movie! Love it! The first time I ever saw it I missed the beginning(without ever realising it) and watched from where he goes to the store to buy the propeller, and finds himself wandering on up to the park. Therefore I missed out on the earlier scene with the painting and the discussion about bringing what you think you see to the table. This made the whole film for me even MORE enigmatic and quite simply blew me away. The whole reason I love Deep Red so much is simply because of this movie.

Did you see David Hemmings in Gladiator? Those eyebrows!

You're right, Nik: this is a TRULY excellent film, even if Hemming's eyebrows hadn't fully developed. Amanda, see it ASAP!