Let’s all stare at a random pic! 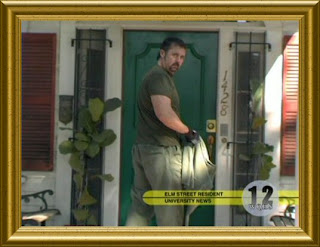 I know what you’re thinking: Who’s that? Why him? And what’s with that stupid fucking frame? Well, said picture stands for two bits of exciting news I have for you today. Firstly, I’ve started blogging for Retro Slashers, a website I’ve long adored and which, along with Hysteria Lives, should be part of your staple diet for slasher reviews and information – yes, even if you don’t normally eat staples (admittedly, they can be a bit sharp going down). Anyway, the above image comes from my first blog post, entitled The 10 Best Slasher Movie In-Jokes. Enjoy!

The second part of that oh-so-exciting news is that I finally – finally! – got round to watching one of the movies I mentioned back in Sham Shocktober, the month when I took it upon myself to preview 30 horror films I’d never seen. And that movie, if you don’t recognize the above screencap, was Behind the Mask: The Rise of Leslie Vernon. When I originally included the flick in Sham Shocktober, I never expected the strength of the positive comments it would draw, such as:

“I have not only seen Leslie Vernon but went on to own it. For me, it was 2nd only to Grindhouse for best 2007 horror. Nathan Baesel strikes that perfect chord of a horror leading man. One minute charismatic, the next psychotic.” (Reel Whore)

“I envy your Leslie Vernon virginity. I love this movie so much... and soon (hopefully), so will you.” (Corey, Evil on Two Legs)

Well, I did love it and, in retrospect, it probably was one of 2007’s best horror films. If you like slashers (as you probably do if you’re hanging out here) and haven’t yet seen this movie, what are you waiting for?! Behind the Mask is extremely clever and a whole lot of fun. If you’re worried (as I was) that it’ll be more about slashers than a slasher itself, then worry not – you get 2 for the price of 1 here, and neither element disappoints.

If there’s one minor quibble I had with it, it’s that Nathan Baesel, while definitely charismatic and psychotic, isn’t the most physically imposing of killers – i.e. he’s no Kane Hodder (the man in the pic above, incidentally). With his slender build and that strange mask on, he looked a little more like he should’ve been ass-raping Christopher Walken in Communion than stalking teenagers. But, hey, either mental image is disturbing enough.

And, as for that “stupid fucking frame” on the picture, as you so rudely put it, I was playing about in PhotoShop, okay? Happy now? Sheesh... some people!
Posted by Ross Horsley at 16:51

A movie featuring a slender talky killer guy ass-raping Christopher Walken sounds like genius to me. And it might garner Walken his 2nd oscar!

If I'd been smarter, I would have come up with three days ago.

Are you pulling a Single, White Female...

What next? To quote the classic line from "Young Doctor's in Love", 'had a lot of things done to the old 'way', and candid camera aint one of them'!

In any event, let's leave Walken and arses for a moment, and focus on 'Behind The Mask'. I agree it is a pretty good flick, and the Wilson cameo a treat. It was one of those 'edge of the seat' situations, where I fear not the reaper, but that the film will drop the ball and collapse in a heap. It didn't, but the tension at wondering if it will is almost unbearable. I will go back and take another look because the idea seemed to me to be better executed than I expected. Must be so easy to fuck an idea like that up; you have to give them credit...and you did, able blogger. Kudos.

Plus I like the picture of Kane, and the frame was a nice touch. Don't listen to the critics. No pleasing some folk.

Speaking of Kane, was 'Ed Gein' a missed opportunity, or was I watching it too late, thinking it was weak and all?

When 4am slides into 5 and the six pack is finished, the old judgement can become a bit hazy after the third or fourth film...

Speaking of which, time to listen to HGL's commentary for "She-Devil on Wheels", and open another beer. Take care, nightowls...

Oh, that's interesting, Mandingo. I didn't know about Kane's take on the Ed Gein story; I've only seen the Steve Railsback version, and Roberts Blossom's Ezra Cobb character in Deranged. Still, you don't sound too enthusiastic! Maybe if Christopher Walken had had a cameo things would've been more memorable...? Ouch!

Well possibly, RH. I don't know in what context a little unpredictable Walken style magic might not liven up any proceedings.

Re 'Ed Gein- The Butcher of Plainfield'- after a slow but reasonable start, with a sweet cameo by Michael Berryman as Ed's 'yesss master' man, we are scarcely given time to get comfortable with our old friend the pinhead before he is prematurely and rather unceremoniously dispatched.

Bit of a bummer, as they seemed to be in- how you say in the mid west-cahoots? Or have I seen too many Walter Brennan movies?

Anyway, from then on, there are some good moments with Kane dispatching the ladies; it's Kane's BBQ, and it tastes good. But beyond this...

I think the rank and file see this film as sacrelige given that it fucks with the mythology. I'm not that much of a purist, so I'm less upset by the failure to stick to the police reports, and more disappointed by the rushed production, and poor support players, and the film just doesn't hang together- not as a slasher, not as a police procedural- but merely a fair showcasing of Hodder (he is very good) and a fair commentary on the disc. Apparently the writer, or the director was related to the cop who interviewed Gein at some point. You would have to check it. You are welcome to my copy for the price of postage, but I live in the land down under...

Otherwise I will give it to the thrift shop. We have a great thrift shop here that specialises in cult items- 'Revenge of the Thrift' and they specialise in all things extreme; They are affiliated with the local baptist church, and on Monday they have their once weekly grand sale 'Grindhousing For God', where they bring out all their exploitation and cult material at discounted prices.

Old father Jack has been caught trying to ram 'Female Yakuza' and 'I Spit' down his cassock so many times he has been barred- so to speak.

I would happily spare the disc this trauma, and send it to you, but I suspect you might pick it up just as cheaply on ebay.

Sounds like one hell of a thrift shop, Mandingo. You better give them that copy of Ed Gein before Father Jack comes after you with a sharpened crucifix and god knows what else! But thanks for the generous offer. You're right, though, that it's a fairly easy eBay purchase here... Which I may well make. Cheers!