I’ll admit it: My Bloody Valentine has never been one of my favourite slashers. I first saw the 1981 Canadian film a few years back and found it atmospheric but dull, with the obvious MPAA edits detracting from what little fun there was to be had. But then the dawn of 2009 promised not only an uncut special edition but also a gore-filled 3D remake, and my interest was positively piqued. 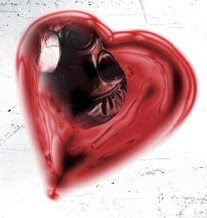 January 16th finally rolled around and, after a ticket-booking misjudgement that meant I missed the movie on opening night, I finally got to catch up with it last night. And, when I say “catch up”, I’m not exaggerating: it’s not often you see a slasher movie with three separate massacres in the first ten minutes and, to be quite honest, if your head’s not already spinning as you acclimatize to the 3D, it will be by the time the “10 YEARS LATER” card signals the end of the prologue. Mine shafts collapse, killers escape, guts are splattered, entire universes form and collapse... It’s actually all a bit garbled and I wouldn’t have objected if screenwriters Zane Smith and Todd Farmer had spent a little more time setting up the story at the outset, since these early events set up the dynamics played out across the rest of the film. But you do get your 3D gore delivered in spades (and, at one point, using a spade) and the blood and body parts fly impressively throughout.

To anyone whose 3D experience is limited mainly to kiddie movies, MBV’s bombardment of sharp implements and sticky viscera will come as something of a shock. I’ll even admit that I actually ducked once – not at a lopped-off limb or swinging pickaxe but, rather embarrassingly, as a cardboard candy box flew towards me. (In retrospect, it’s entirely possible I was making an unconscious lunge for the potential chocolate contained therein.) In any case, there’s no doubt that the 3D aspect of My Bloody Valentine is in-your-face fun all round.

But is the film any good? Well, it’s fun and it’s colourful and it certainly entertains, but it’s not and probably never will be a classic slasher. Nothing about its setting or cast (especially the dreadful Jensen Ackles) feels in any way “real”. I know that sounds stupid; after all, who demands realism in their slasher movies? But I find I need something to invest in, like the feeling that someone along the way is in real danger or doesn’t deserve to die. Here, the mining town of Harmony simply looks deserted. Hell, there aren’t even any extras. (Would too much background detail have made the 3D blurry or something?)

There’s no sense of a township in terror, either. Remember Scream and its seemingly omniscient killer just waiting to get you on your own? MBV’s maniac miner certainly looks the part in gasmask and heavy-duty work duds, but never feels like anything other than a cipher (which is interesting, admittedly, when you consider the “surprise” ending). I did enjoy the film but it wasn’t the essential experience I was hoping for and, shorn of its 3D element, wouldn’t be something I’d recommend to non-slasher fiends.

At the very least, it’s secured a long-awaited uncut rerelease of the 1981 film on DVD, which I’m really looking forward to revisiting just as soon as my Amazon order comes through. Something tells me that, of the two Bloody Valentines, the 80s original may be the one with the extra dimension.

I couldn't have worded it better myself. It's a fun movie, but one I easily forgot (minus two or three decent scenes) 10 minutes after the film ended.

And it just wasn't scary. I mean, I liked Hatchet, but do I consider it a true throwback to 80s slashers? Well, no. It's got too much comedy. I felt that way about MBV 3D as well, except that this film got better as the film progessed. It got more serious and interesting, but it was too little too late. For me anyhow...

Jensen Ackles isn't much of an actor, but oy vey - what a cutie!

Oh, 3-D. You are such a mistress that I will fall for anything as long as you come right at me.

Heretics, all of you, I say!

I loved this movie! I Fell for it hook, line and pickaxe. Sure I had some quibbles but I could probably say that about all my favorites. I think this one really got the slasher spirit right and that is rare. -Unk

I loved this movie, also.

I didn't really enjoy the first film though.