I read an opinion on some message board that the upcoming DVD release of Slaughter High might be Lionsgate’s way of testing the water before greenlighting a remake of the toilet swirly-revenge slasher. That I can’t see, I’m afraid; the name just doesn’t have the cultural stock of Friday the 13th or even My Bloody Valentine. On the other hand, I never thought anyone would want to remake Offerings, Night Screams or any of those goofy late-eighties slashers, either. But that’s pretty much what Joe Ariola has achieved with Knock Knock (2007)... Joe, I think I love you. 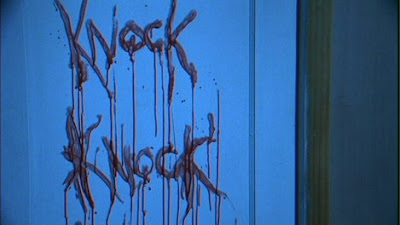 I can’t get enough of the low-budget likes of Offerings, Night Screams, Hell High and Psycho Cop. Although they lack the initial excitement and glimmers of originality that surround the slashers from the earlier half of the decade, they have an ambience all of their own – one soaked in pastel décor, cheesy rock, boring sleepovers, late nights at the mall, and deserted football fields. In fact, just thinking about it is making me want to watch The Last Slumber Party.

Knock Knock stirs in some MTV flash-editing and a touch of techno music but, really, it’s one of these late-80s efforts through and through, from its suspicious, slobbish janitor character to a masked killer that looks as though someone stuck Leatherface’s head on Michael Myers’ body. All that’s missing is a fat sheriff... I mean, there is a sheriff (with the unlikely name of Cutter) but he’s a weedy, scraggly-haired Johnny Depp type, so perhaps the makers were referencing Depp’s early role in A Nightmare on Elm Street. Or perhaps I’m reading too much into it.

The movie begins, aptly enough, with a knock-knock at the door of a nameless cheerleader. Actually, I don’t think it’s stated whether she’s a cheerleader or not, but she’s doing that whole T-shirt off-the-shoulder thing and, hell, this is a slasher movie so she probably is a cheerleader. Anyway, the point is: there’s a knock at the door and, when Nameless Cheerleader goes to answer it, there’s no one there. Creepy! Personally, I’d lock the door, go upstairs and listen to some Enya if that happened to me, but NC is made of sturdier stuff and answers several more mysterious knocks, with much the same result. On the last occasion, however, a pair of scary hands burst through the door and grab her by the throat! Either she’s late paying the Avon lady this month or there’s a killer on the loose who doesn’t mind the odd splinter. 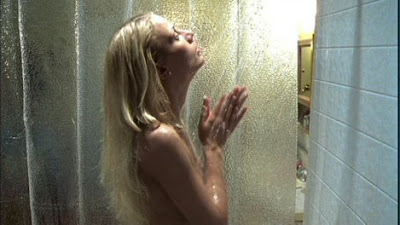 I dare say the small town of Glass County is rocked to the core by this vicious crime but the next night’s school football game goes ahead as planned, although there don’t seem to be many extras in attendance. Afterwards, one of the players is ambushed and killed whilst walking home, and ends up skewered to his own front door with a set of ice picks. And, when I say “ambushed”, I really mean it! There’s no heavy-breathing stalker nonsense for this poor guy – just a killer who leaps out and gets stabby with the stabbing, no questions asked. Either he’s gone and got on the wrong side of a travelling ice pick salesman or there’s a killer on the loose who doesn’t mind the odd splinter and has no patience whatsoever!

What this case needs is a crack team of serial killer profiling experts all the way from the FBI... Or a busty blonde detective babe called Billie Vega and her sleuthing grandpa sidekick. Glass County goes with the latter and, with local teenagers dropping like gruesomely mutilated flies, it’s up to this mismatched duo to stop the killer before he knocks – and indeed kills – again. 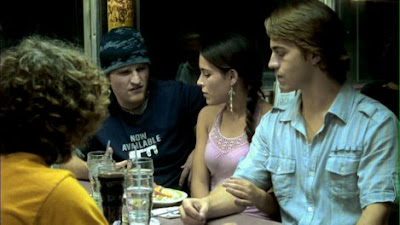 I can’t knock Knock Knock. Throughout its running time, I feared it might be on the verge of copping out by taking the supernatural route (a bugbear of mine) but, no – it thankfully stays within the boundaries of a straight slasher movie, albeit one with a fetish for ghostly chanting on the soundtrack. In its final third, the action shifts slightly away from the teenage stalkees and towards the detectives, but this is something that happens in many an authentic 80s effort, too, like the entertaining Night School for one.

The points it loses for epileptic editing, Knock Knock gains back by liberally dishing out the gore. This is a killer who doesn’t just kill, but chops, lops and generally slops out the slasher mince – all seemingly without the aid of CGI. In fact there’s an impressive locker-room impalement I simply couldn’t get my head around, so it looks like I’ll be checking out the DVD’s make-up FX featurette to find out how they did it. 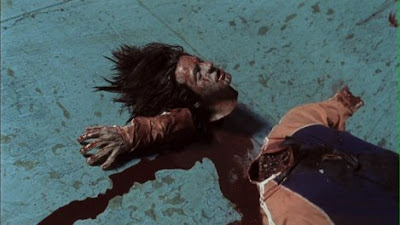 It’s not a model of suspense, then – or even sense – but, in terms of that all-important slasher atmosphere, Knock Knock is one that really delivers. Right to your door!

Wowzers, wowee, wow-wow (and that last still is all kinds of AWESOME)! This sounds good fer sher. I'm going to check this out, I think!

I totally agree. That last still derailed my train of thought and I can't remember what i was going to say. Other than, pure awesome!
Thanks Ross!

i rented this a few months ago and turned it off after the opening scene -- it seems i may have been too hasty in my condemnation of this film. i think i'll give it another look... thanks!