Holy flying mammals! I was going through my TV’s hard drive recently, deleting most of the 4,368 movies I’ve recorded from The Paranormal Channel, when I realized I had the perfect combo for a bat-themed double bill: 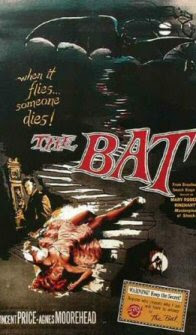 Why a bat-themed double bill, you ask? Well, simply because I could. And the two movies – 1979’s eco-thriller Nightwing and 1959’s Old Dark House mystery The Bat – couldn’t have been more different. Yet together they make the title of a fabadoo-sounding 70s cop show, Nightwing and the Bat!

Oops, no, what I meant to say was that, together, they made a most satisfying double feature. You know, like Carrie and Grease (and, if you’ve never boogied back-to-back with those two, you’ve never lived... Just make sure you watch Carrie first or the come-down will kill you). Anyway, I went with Nightwing first, mainly because I’ve wanted to see it for years. There aren’t many big studio horror films I’ve left to see and I’m especially fond of the “nature bites back” cycle that followed Jaws, of which this and the same year’s Prophecy are two of the more generously budgeted.

I’ve actually got an old ex-rental video of Nightwing I never got round to watching (and now I’ve seen it in pristine widescreen on ITV4, I’m glad I waited). The cover looks like this: 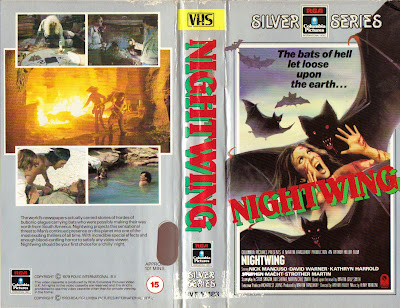 ...and explains the gist of the film thusly:

The world’s newspapers actually carried stories of hoards of bubonic-plague carrying bats who were possibly making their way north from South America. Nightwing projects this sensational threat to Man’s continued presence on this planet into one of the most exciting thrillers of all time. With incredible special effects and enough blood-curdling horror to satisfy any video viewer, Nightwing should be your first choice for a ‘chilly’ night.

No, I’m not really sure what that “chilly night” bit’s getting at, either. If anything, Nightwing is a really hot, parched-feeling film set mostly in the desert, where dehydration and death, not to mention unsightly sweat patches, are a constant danger for the characters. All in all, I think the video cover sums it up better with its tagline, “The Bats of Hell Let Loose Upon the Earth”... I mean, wow! The bats of hell are loose? Tell me that and I’ll watch anything!

Specifically, said bats (of hell) pose a threat to the community living in and around an Indian reservation in New Mexico, where Chief Duran (Nick Mancuso) divides his time between protecting local land from unscrupulous developers and frolicking naked in a hot spring with his girlfriend, Anne (Kathryn Harrold). His elderly uncle (George Clutesi) seems to be going a bit loopy in his old age, drawing scary-looking paintings on the floor of his sacred Indian hut and ranting about the end of the world, “opening the circle” and blah blah blah... Sorry, all I could think by this point was “BATS!” and I may have missed some of the fine details.

It’s a bit of a long wait before we really see anything resembling a bat, as it happens. Much like Jaws, it’s about halfway through before one pops out, I think (not that Jaws had any bats in it). But I was happily caught up in the various reservation dramas, ranging from Duran’s despair at his girlfriend moving away to collage, to tension between the Maskai Indians and a neighbouring tribe. Meanwhile, in the middle of the night, something’s sucking the blood from local cattle and – gasp! – people, leaving behind only a stink of ammonia and some very stiff-looking corpses.

Dr David Warner, who’s arrived on the scene in a mobile bat-lab, is convinced that bubonic bats are behind it all – a threat to humanity he’s devoted his life to eradicating. All they do is “drink blood and piss it out as ammonia,” he spits (along with a few monologues about the essence of evil that mark him out as this film’s Dr Loomis type) and so he never leaves home without lots of wire mesh and a ton of explosives. But first he has to find the bat cave...

As I said, it’s a while before we actually see any of the nocturnal nasties, but what an entrance they make! As soon as the campfire scene begins, prepare for Final Destination-style shocks galore. This is Nightwing’s standout scene and rivals anything in Hitchcock’s The Birds for squealing, twittering, hair-tangling horror, and nothing else in the film really comes close to matching it, unfortunately (although there’s a wild, fiery climax).

Kathryn Harrold = WHITE HOT in my book, and I loved the scenes following the campsite attack that find her stranded in the desert, getting all MacGyver with wires, tyres and fires (and some unconventional “fishing”). Why Duran doesn’t want her to follow him into the bats’ eeeevil lair at the end of the film, I’ve no idea, as it’s plainly obvious she could whip up a flame-throwing TNT bat-apult in five minutes flat, using only some string and a yogurt pot.

Nightwing needs a DVD release; it’s almost as good as Prophecy, which has had at least two, but then that one does have a mutant bear-monster. Nightwing’s bats are a little less elaborate but still effective, and studios just don’t make this kind of silly “serious” horror anymore. Still, I’m not sure about the environmental message: Save the world; kill the bats? Squeeee! Rating: 3/5

The bat in, um, The Bat is another kind of monster altogether: the human sort, here to be found prowling around a spooky mansion decked out in black, sporting a fedora and razor-blade talons, in search of blood and hidden money. The first we see of him – black-gloved claws crawling around a door jamb – is pretty hokey, but our second glimpse of a faceless form in the shadows outside a window gave me a genuine jolt. How the innocent, pre-Psycho audiences of 1959 reacted to it back in the day, I can only imagine, but the shock holds up really well today. 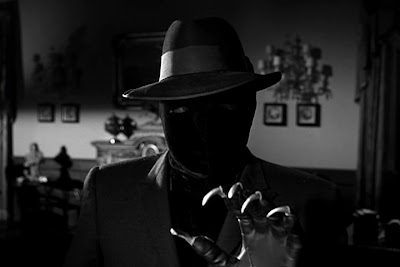 That’s one of the best things about The Bat: it’s a scare-comedy in the vein of The Cat and the Canary but, unlike most of its ilk, its emphasis is on the scares. The laughs, mostly comic asides buried in the dialogue, are just the icing on an otherwise icy murder mystery. They could’ve gone either way with the villain – keeping him in the shadows would’ve no doubt made him scarier, but director Crane Wilbur ensures we see plenty of him skulking about, which lessens his impact but doesn’t hurt the film plot-wise. Incidentally, his method of killing – tearing out the throats of his victims – is surprisingly brutal.

Agnes Moorehead plays mystery author Cornelia van Gorder, who’s rented out a country mansion called The Oaks over the summer while its owner, bank manager Mr Fleming, is on an extended hunting trip. Unbeknownst to her and comedy sidekick Lizzie (Lenita Lane), Fleming has been embezzling bank bonds to the tune of a million dollars, which is now hidden in the manor. The only other person who knows about the stash is Dr Wells (Vincent Price in a subtle turn) who obviously has more then the health of its residents on his mind when he makes his frequent trips to the mansion...

Oh, The Bat, I adore you! And the plethora of debates and nitpicks over at the IMDb concerning its plot twists suggest there are plenty of people out there who just live this film. Certainly, it’s enormous fun, has a great creepy-house atmosphere and enough going on to sustain multiple viewings. I can’t understand the reviews that call it boring; there’s not a single line of dialogue that doesn’t enhance the mystery or propel the plot along in some way.

Best of all is the movie’s structure. It’s essentially a three-act play, with each of the first two acts culminating in a night of terror at The Oaks (the second of which features a real cocoa-spiller of a murder). Day #3 builds to a fine suspense scene involving a secret room, and I honestly didn’t find the outcome predictable at all. Considering you can get hold of the DVD of this one for less than a pound, I know I’ll be adding it to my collection. Oh, and in case you’re wondering, The Bat does contain some bats of the furry, flying kind as well: big ones, small ones, real ones, rubber ones... Don’t let the film slip off your radar. Or sonar. Or whatever bats have. Really, you’d think I’d know by now. Rating: 4/5

Last night’s double-header, then, marks my contribution to supporting the bat-movie industry and, if that means I never have to watch the Lou Diamond Phillips movie Bats, well, that’s fine by me. I never thought I’d have such a fearful funfest with a bunch of creatures I basically find more cute than frightening, so maybe next time I’ll try Night of the Lepus... How about those killer bunnies, huh?
Posted by Ross Horsley at 23:14

Night Of The Lepus! You totally should.

I remember seeing NIGHTWING when I was a wee lad and thinking it was the best thing since sliced bread.

Later on in years, not so much. But it definitely has something about it being a studio film about such a subject. I totally need to revisit it again. That's fer shure. Thanks for the reminder and fun review!

Wow, Meep, I've just realised that Night Of The Lepus is available on DVD! The price is a little hare-raising, though... Geddit? Hare? Ahahaha!

I have seen Lou Diamond's Bats and quite enjoyed it. I think bats are adorable, even the fanged-puppety kind. I just do.

I've also seen Nightwing, but it's been so long, I can't say I remember much about it. I need a bat double bill too, apparently!

Amanda: You say you've seen Lou Diamond's Bats... but have you seen his balls? I hear he has quite the collection of baseball memorabilia. If Bats really is worth watching, I might give it a go -- when I find another bat movie to pair it with, of course!