“The only way to improve that property, sir, is to raze it to the ground and sow the land with salt!” 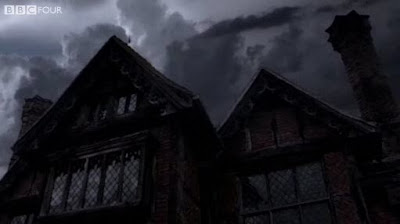 Here’s something that probably would’ve made my Top Horror of 2008 list if I’d watched it in time; but the made-for-TV Crooked House was only screened during Christmas week, by which time I was stranded at Chicago airport sipping margaritas in Las Vegas... Dammit, BBC, you’re never going to make it onto end-of-year lists if you carry on like that!

Remember those bloody brilliant horror anthologies that Amicus churned out in the 70s, like Vault of Horror and Tales from the Crypt? Well, Crooked House is a modern take on the subgenre, written by Mark Gatiss of the creepy/funny TV series The League of Gentlemen. There’s two ways of enjoying Crooked’s spookiness: either in three 30-minute instalments (as it was originally screened over three nights on BBC Four) or as an omnibus TV-movie edition. And we all know that TV movies rule, so that’s how I decided to catch up with it.

Now, when I say “modern take”, I genuinely mean it’s something a bit new and original in style, as opposed to a straightforward pastiche of the Amicus approach (which the League of Gentlemen had already done – superbly – in their 2000 Christmas special). Without giving too much away, Crooked House actually ties its tales together in its third part in rather a neat way, sorta like Pulp Fiction but without all the coke and cameos. Anyway, Crooked House is much more than the sum of its parts. And, without sounding too crass, let’s take a look at its parts.

As with all anthology movies, you get your wraparound story – that’s the bread of the anthology sandwich or, to put it literally, the “wrap” that goes “around” the tasty filling. Here, it’s the story of high school History teacher Ben (Lee Ingleby), who’s popped into his local museum with a mysterious artefact dug up in his back garden. The curator (Mark Gatiss himself, sporting a convincing Scottish accent) believes it to be a doorknocker from the now demolished Geap Manor, an old house that “drew evil to it like a sponge draws in water” – or, to stick with our analogy, like a sandwich draws in water if you, say, drop it in the bath. Anyway, Ben wants to hear more – about the house’s history, that is, not the porous properties of sponge – which is lucky for us or it’d be a pretty boring film. Cue flashback!

Part One: The Wainscoting 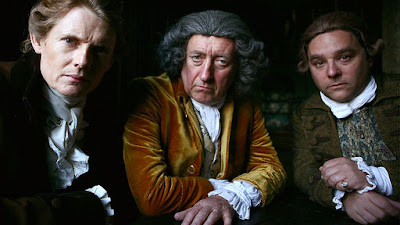 Wainscoting, in case you’ve never lived in an English country manor, is wood panelling on an interior wall, and it’s at the centre of the horrors for Geap’s owner in 1786, Joseph Bloxham (Phillip Jackson). He’s having the place refurbished, after making his fortune on the back of some dubious business deals that haven’t gone down too well with the local townsfolk. Still, the place looks simply marvellous with its fancy new paintwork... If only those strange blotches would stop appearing on the walls, accompanied as they are by strange noises from behind the panelling. As it turns out, it’s all down to a nasty secret and some very poorly sourced building materials... 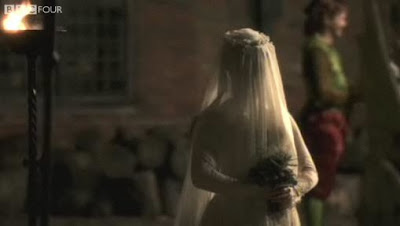 Another nasty secret lurks in the background of the second story, set in 1927, when heir to Geap Manor, Felix (Ian Hallard), is busy romancing the lovely Ruth. She’s a little lower on the social ladder than his family might be used to, but Felix thinks she scrubs up simply spiffingly. At a costume party held at the house, the couple announce their engagement – which doesn’t go down too well with some of the guests. But the only one Ruth’s really worried about is the mysterious, veiled bride she keeps glimpsing in the shadows. Everyone else is in high spirits, however, and it’s all fun and games. At least until the lights go out... 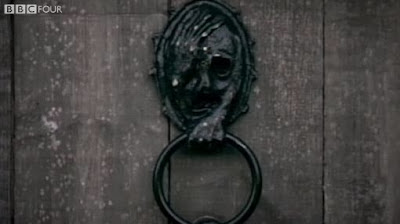 Welcome back to the present, where Ben (remember him?) isn’t quite the heir to Geap Manor exactly, but it seems that his townhouse is built on the land where it once stood. This would explain how the old doorknocker turned up in his garden, although not the tortured expression on its twisted face. Perhaps it’s not the best idea to hang it on his front door, but that’s what Ben does. And soon comes a loud knocking in the middle of the night...

Following the pattern of the best anthologies, Crooked House uses its first story as a nice warm-up for the chills that follow, then gradually ramps up the fear towards a deliciously nasty pay-off. Thus, The Wainscoting is the least disturbing of the three tales but Gatiss fills it with period dialogue I just couldn’t get enough of, and the revelation when it comes unsettles like a comfortably creepy M.R. James tale.

Something Old is, simply put, a great ghost story. Economically written (there’s almost enough plot here for a full-length feature but it flits by), it relies on character to draw you in and, like the first part, is terrifically acted. It’s almost a disappointment when we segue into part three and leave its charmingly spooky world – or, at least, it would be if The Knocker didn’t immediately grip with its present-day mystery, leading to a chilling resolution that’s all the more effective because Gatiss allows you to work some of it out for yourself.

I won’t claim that Crooked House is the scariest ghost story of all time or anything but I spent most of it enjoying the all-too-rare feeling of tingles running up (and down!) my spine. And I didn’t even have my Prestigio Massage Chair switched on. The idea of period horror on a BBC Four budget may conjure up a few chills before you even get to the proper thrills, but everything about this worked for me, and I think it’s probably entirely down to Mark Gatiss’s devilishly intelligent writing and enviable understanding of the genre. I can only imagine what kind of amazing sandwiches he’d make if he opened up a deli.

Ah, this was a rare old slice of festive creepiness, and after realising there was no MR James adaptation this year was pleased to see this in the line-up. Gatiss certainly knows his onions, as was proved by the fantastic League of Gentlemen Christmas special a few years back, and I hope that this becomes a regular annual event.

I too was somewhat disappointed with the modern day setting of the final story, but found the over familiarity of the whole thing actually worked in its favour. And that 'thing' which appeared fleetingly towards the end was used just the right side of sparingly which really helped give me a lovely christmas shiver. As with MR James' writing, we were given just enough of a glimpse to chill but not enough to quite dwell upon it's shortcomings.

What with Dead Set and then this, I'm really glad to see British TV indulging in some horror for grown ups once again, something which seemed to come to an end with GhostWatch.

This sounds utterly fantastic. I really want to see the second one. It just sounds like something that would scare the crap out of me.

You Brits. You sure know how to do it right.

Nik: I'd love Gatiss to do a follow-up next year, and you described it perfectly as "a lovely christmas shiver". I'm wondering if the upcoming BBC3 show "Being Human" will add to the TV horror trend...?

If someone told me about Being Human, I'd think it sounded cool, but seeing the advert first hand the horrific 'Three' logo gave me chills of the not so chilling variety. Every passing year just seems to push me further and further out of their target audience. Bah, pesky kids, with their hoodies and binge stabbing!

Of course I'll still be watching however...