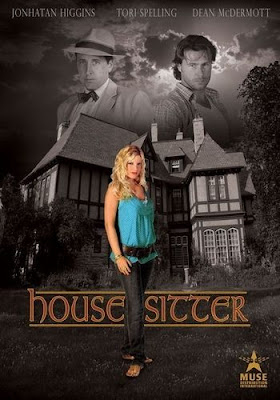 And I tell you: I only have to look at this poster for The House Sitter to know that everything is right with the world. Tori is centre stage, dressed in cast-offs from Paris Hilton’s wardrobe (but we won’t hold that against her), obviously starring as a Nancy Drew-like figure who’s no doubt investigating the spooky mansion behind her, over which brooding, good-looking men glare in moody monochrome. It’s thrilling, it’s chilling, it’s riddled with typos (Jonhatan? House Sitter instead of The House Sitter?)... In short, it’s TV movie heaven. Scratch that. It’s heaven. Period!

Should you require any further evidence that The House Sitter was Meant To Be, just check out the casting of Tori Spelling and Dean McDermott – husband and wife in real life. Because, of course, Tori is now Tori Spelling-McDermott, and referred to as such in the credits. And I hear she won’t answer to anything else!

Mrs Spelling, then, is an artist with painter’s block who answers an advert on DumbThingsToDo.com for a housesitter required to look after the home of eccentric coin collector Frank (Jonathan Higgins) while he’s away on business. Also staying in the house is Frank’s cross-gendered female cat, Fred, who’s “desperate for female company” (this is never explained, and nor do I think ever could be). Tori takes one look at the wine cellar beautiful manor and signs up. After all, it’ll provide the perfect opportunity for her to change into dungarees and scribble giant pictures of the garden – not to mention fall in love with hunky plumber Phil (Dean McDermott) after a mysterious burst water pipe bursts mysteriously all over the kitchen floor.

But, ah, sweet TV-movie plot-twists... because no sooner have Mr and Mrs Spelling-McDermott shacked up in mansion-house bliss than Frank calls to let her know that he’s finished up his business early and is on the way home right this very fucking minute! So Tori has to kick Phil the Plumber out of bed and pack him off in his van... Just in time, too, because Frank is back with some valuable rare coins. Oh, and the scary notion that he’s going to marry her.

Tori’s less keen on the idea and does a runner to the address on Phil’s business card. But that turns out to be a motel... Gross! Can she trust someone who’s been lying to her all along about his skanky abode? If only she’d managed to actually sell some paintings – then she wouldn’t be in this mess!

As a TV movie thriller, The House Sitter teeters deliriously on the edge of brilliance, with an accumulation of plot twists that eventually converge to put Tori (plus two innocent friends who turn up on the doorstep!) at the mercy of an insane killer. You’ve probably worked out by now that either Frank or Phil is a bit of a madman, but you’ll have fun figuring out the hows, whos and whys – and, really, it’s a fairly suspenseful affair all round.

What doesn’t quite work is the pacing, which involves some highly unnecessary fade-outs to “the next morning” – never the best technique, especially during chase scenes. Thankfully, there’s loads to make up for that, beginning with the great guilty-pleasure casting of Tori and Dean as torrid lovers. Not to mention Fred the cat. Meow!

Oh, I've been wanting to see this. I'm such of fan of Tori's TVMs (Co-ed Call Girl, anyone?) and have never seen her husband in anything aside from their reality series. I am curious about his acting and about the chemistry he has with is wife.

Ah, but they made a TV MOVIE together! Surely 'tis the very definition of chemistry.