Calendar Girl Murders is a movie with a strange power... A power to turn everyone in it ten years younger! Take a look at Tom Skerritt. He was over fifty when the film was made – but, according to the script, he’s apparently “just turned forty”.

Then there’s the strange case of Sharon Stone... Stone was 35 when she hit the big time with Basic Instinct in 1992, but when Calendar Girl Murders was released in the UK a year later (straight to video, natch) she was suddenly 26 again. That’s because the film was actually made (for TV, double-natch) almost ten years previously in 1984. Any Sharon Stone fans hoping for an even sleazier follow-up to Basic Instinct would likely have been delighted by the youthful Stone on offer here – but probably less so by the then-shockingly dated music, costumes, and general lack of sleaze.

As for Tom Skerritt, well... by this time, he was actually a full twenty years out of sync with himself, and had to take a ten-year break from acting in order to catch up with his real age and thus realign the cosmos.

Further complicating matters, Calendar Girl Murders was given a new title when it hit video stores in Britain. It was renamed Victimised, perhaps to make it sound like Stone was the main character, and it looked like this: 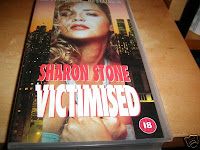 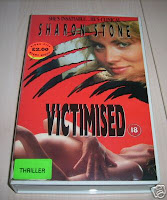 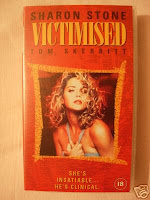 ...perhaps to suggest that Shazza got naked a lot. Which she doesn’t. Anyway, I’m going with the original title here. After all, the film was known as Calendar Girl Murders for a whole decade before the success of Basic Instinct rescued it from obscurity.

Tom Skerritt plays Dan Stoner, a top detective and family man with a wife and teenage son. When a top model plummets to her death from a hotel balcony, Dan suspects foul play. The deceased, Pam, had worked for Paradise magazine, a Playboy-like outfit that also publishes a calendar, in which Pam had posed as Miss January. Dan’s suspicions appear to be confirmed when, soon afterwards, another model is killed – this time, Miss February (Claudia Christian), who’s viciously stabbed in the stomach whilst making a late-night raid on the fridge. From then on, none of the monthly models are safe, as Miss March is attacked during a pool-party power-cut (I’m totally gonna call my band that) but saved from drowning when Dan dives to the rescue, performing life-restoring mouth-to-mouth resuscitation through his soggy moustache. 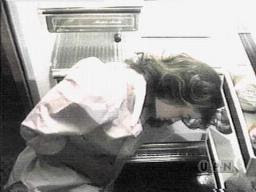 How does Sharon Stone fit into all this excitement? She’s Cassie Bascomb, a former secretary-turned-model-turned... er, stockbroker, I think. We never see her actually doing anything at work, but it definitely requires sitting at a desk and wearing big, black-rimmed glasses. Cassie may hold the key to the mystery but, shortly after Dan brings her into the case, her house is ransacked and the words “YOU’LL BE SORRY SLUT” are scrawled on her window in lipstick. Oh yes, someone is mad... Mad enough to kill! And they don’t much care for punctuation either!

Despite its array of teasing box art, Calendar Girl Murders is a pretty pedestrian TV movie, as short on thrills as it is the sizzle its various video covers promise. After the attack on Miss March, even the calendar-based killing subsides, and the movie just gets duller and duller until it reaches a doubly-dull climax.

One element that did manage to surprise me, however, was a few seconds of softcore porn apparently edited into one of the scenes, perhaps for the 1993 British release (which also accounts for the otherwise baffling 18 certificate). Dan’s son is watching the Paradise awards show on TV, when the gyrating, legwarmer-clad dancers give way to a close-up of breasts being squeezed and a leather belt going somewhere I’m sure it wasn’t meant to be worn. I doubt this was part of the original dance routine, and it also explains why Mrs Stoner barely bats an eyelid when she sees what her son’s watching!

Now, if only they’d edited some suspense into the movie, too...

OMG! OMG! OMG! I LOVE this movie. I mean, it's horrible, but it's awesome too! I wrote a review of this at Camp Blood. I have to admit, I adore every horrible second of it!