Or, to be specific, let’s talk about Michele Soavi’s 1991 Italian horror-fantasy, The Sect.

And the first thing I want to talk about is how damn underrated this film is. If you’re any kind of fan of the films of Dario Argento (particularly Inferno or Phenomena) you really owe it to yourself to see this one. It’s not the easiest film to find, thanks to the lack of a UK/US DVD release, but the Italian release I got hold of (from the intriguingly named Cecchi Gori company) has an English-language audio option and is well worth seeking out.

Argento himself produced and co-wrote The Sect (known as La Setta in its home country) and his blood-smeared fingerprints are all over it. Tracking shots... check! Gory murders... check! Insects... yuck! Weird dialogue... that would rather appear so! In fact, there’s barely an Argento base left uncovered.

The movie is definitely the work of director Soavi, however, and he leaves a personal stamp on it via the excellent characterisation and driving plot – not always two of Argento’s greatest strengths. Soavi has also suggested that he gave Dario carte blanche to create the prologue sequence in the hope that he’d leave the rest of the script alone. So what of that opener? Welllll...

Southern California, 1970: The livin’ is easy and the lovin’ is free. A group of hippies are busy listening to The Eagles, throwing rocks, and decorating each others’ breasts with paint. But there’s a snake in the grass... Literally, there’s a snake, it’s in the grass, and it makes a little boy cry, before heralding the arrival of a mysterious, Christ-like stranger, who looks a bit like Donald Sutherland and quotes Rolling Stones lyrics in scary fashion (although, to be honest, all the fashion in this scene is scary). 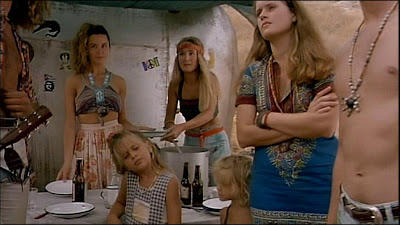 Oops, did I say “Christ-like”? Make that “Charles Manson-like” because soon all the hippies are being slaughtered by the stranger’s accomplices as he yells, “Scream! Scream your fuckin’ head off!” Obviously, they belong to some kind of cult... A sect, you might say. They’re waiting for their “time” to come, but an unseen master-villain observing from his car assures Manson-man that the time’s not right just yet.

The prologue over, we skip ahead to Frankfurt in 1991. After some funny business involving a stolen human heart, an unfortunate pickpocketing incident on a tube train, and a public suicide (all this in less than five minutes!) we’re introduced to a young teacher, Miriam, played by Kelly – sister of Jamie Lee! – Curtis. Miriam is driving home one day when she narrowly avoids running down an old man (Herbert Lom) carrying a mysterious parcel (is there any other kind?). Soon, she and her new buddy are bonding over tea at her country cabin, which she shares with a pet rabbit and 9,000 bunny ornaments. Evening falls, Mysterious Old Man falls asleep, and Miriam also decides to turn in for the night. 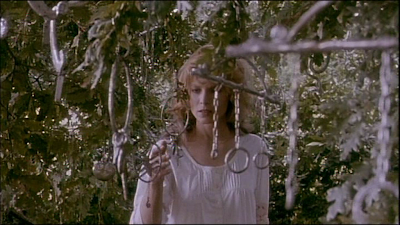 From here on in, things follow along a pretty predictable path: the old man sticks a prehistoric beetle up Miriam’s nose as she sleeps; Miriam dreams of being pecked to death by a stork; and the house turns out to be built over a giant secret chamber. To reveal any more might make it all sound a little outlandish, so I’ll quit while we’re ahead. Except to point out that we’re still only about twenty minutes in!

I really couldn’t get enough of The Sect. It’s everything you expect from a good Italian horror film (stylish, nightmarish, ingenious) and more besides (gripping, well paced, coherent). There’s a definite Alice in Wonderland vibe as Miriam follows her white rabbit down a hole in her basement, opening up a world of extraordinary sights and hidden horrors, but the film is nevertheless a true original. 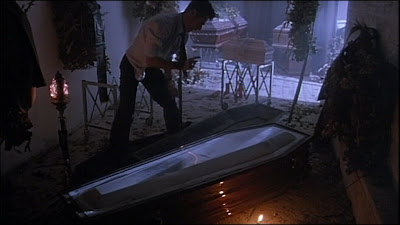 Miriam herself is a fantastic character, and Kelly Curtis fills her with endearingly believable quirks (I particularly liked the way she pushes a cupboard door closed with her forehead after making tea at one point). Barely a scene goes by in which she doesn’t make some kind of freakish discovery and, though these aren’t all entirely explained, they combine to create a bizarre and mesmerising atmosphere.

If The Sect had been directed by Dario Argento, I’m convinced it would be regarded as a classic. I’m a huge Argento fan myself but have to concede that this outing actually outdoes some of his work – even in what you might call its Argento-ness! So quit waiting for The Third Mother, the conclusion to Dario’s supernatural nightmare trilogy begun by Suspiria and Inferno... It’ll have a hard time surpassing The Sect.

They ain't listening to the Eagles - that's AMERICA and their awful song, A HORSE WITH NO NAME!

Well spotted! Thanks, you're quite right :)

Nice observation about the forehead pushing closed the cabinet thing - you encapsulate all the film's strengths very well. I didn't know she was JLC's sister - so many layers! If they don't add up well, who cares about math at a time like this!

Do you think the face ripping scene might be because Soavi and Argento misinterpreted the Stones' lyrics later in that song, "stole many a man's soul / and face"?