It’s time for me to get my feet back on the ground here at Anchorwoman In Peril! The last two films I’ve reviewed have both been fantasy-fests set way out there in the realm of the supernatural (the brilliant The Sect and the, well, not-so-brilliant Mirror Mirror 2). What better return to reality, then, than a gritty crime story torn from today’s headlines? A tale of revenge... A tale of jealousy... A tale of MURDER!

Of course, murder hasn’t always been the messy, motiveless crime we hear about on the daily news nowadays. As recently as a couple of decades ago, if you had the misfortune to get murdered, it would most likely be in the drawing room of a stately home, surrounded by classically trained thespians sharing a bottle or two of cognac. All you really had to do to avoid being murdered was make sure you didn’t get stranded anywhere during a storm, especially if anyone was planning on reading out a will.

Such is the milieu of Rehearsal for Murder, a 1982 TV movie concocted by the dynamite mystery-writing duo of Richard Levinson and William Link (Columbo, Murder, She Wrote). Swap “stately home” for “Broadway theatre” and “cognac” for “coffee” and you’ve got the basic set-up of this ingenious whodunit.

The games begin in the opening credits. Remember how in Murder, She Wrote you could often guess the identity of the killer by picking out the guest star from amongst the cast? Or Columbo, where the guest star was always the killer? In Rehearsal for Murder, the big names (Lynn Redgrave, Robert Preston, Patrick Macnee) slip by quietly until there’s a special credit that reads: “And Madolyn Smith as Karen Daniels”, followed by a swift: “Special Appearance by Jeff Goldblum” and a sly: “And William Daniels”. With all that misdirection, why... any one of them might be the murderer! (And you’re not getting any clues.) 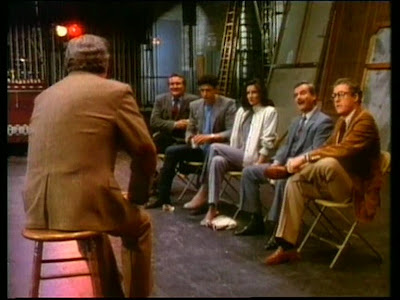 Enter Alex Dennison (Robert Preston), a playwright still mourning the death of his fiancée (Lynn Redgrave) a year earlier on the eve of her Broadway debut. He’s hired a theatre for the afternoon and invited along the producer, director and cast of that ill-fated show. Together, they’re going to read through a few scenes from Alex’s new play – a murder mystery. What they don’t know is that Alex has arranged for a police detective to secretly observe the proceedings from the darkness of the auditorium... because Alex’s new script isn’t really a play. It’s an elaborate trap to ensnare his girlfriend’s killer! 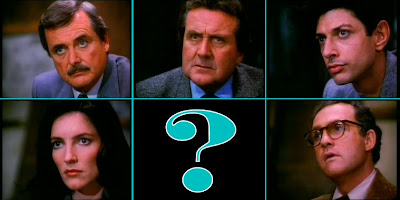 From Sleuth to Deathtrap, via the wonders of The Last of Sheila, I’m a sucker for this stuff. The more twisted the mind games, the more repressed the perverts, the more faded the guest stars, the more I love it. Describing his approach to writing a mystery, playwright Alex notes: “You take the audience by the hand and you lead them in the wrong direction. They trust you... and you betray them”. Of course, he might just as well be talking about Rehearsal for Murder – the kind of delicious mystery where every fade to commercials ends with a close-up of each suspect’s face accompanied by an appropriately ominous chord on the soundtrack.

But Rehearsal for Murder isn’t without class. Its twists may not be quite as fresh as they might have seemed 25 years ago, but time has been kind to this type of mystery, where a bitchy aside reveals more than a whole test tube full of DNA, and murders are solved by sleuthing, not swabbing. Book yourself a front-row seat.

Bravo my dear Anchorwoman! Bravo! I adore this movie. You already had me at Levinson & Link. I'm thrilled to see their names mentioned in the ether. They were an incredible duo and I have yet to be let down by their talents. I love that they could make movies like That Certain Summer and then something fun like this. Thanks for writing about this movie!