Boy, have I been doing my maths homework for you today! Take a look at this: 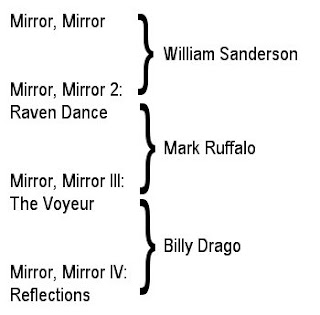 Fig 1. Six Degrees of Crappy Sequels
As you can see from this detailed diagram, it is a quirk of the Mirror Mirror movie franchise that one member of the cast always returns to appear in the following sequel (more often than not playing a different character). Thus, Mirror Mirror 2 features William Sanderson from Part 1, while also introducing Mark Ruffalo, who carries the baton on into Part 3. That film starred Billy Drago, who went on to star in Part 4. And then Part 5 features... well, no one because it hasn’t been made yet. But I’m hoping for P.J. Soles.

Anyway, Mirror Mirror 2 comes from the early part of what I like to call “the Mark Ruffalo years”. I guess we could equally call these “the later William Sanderson era”, but Sanderson doesn’t do much here except act cranky and throw tarantulas around, whereas Ruffalo gets to wear a billowy purple shirt and be a super-cool spooky demon etc. Having said that, I shouldn’t really undermine Sanderson, seeing as how his character is responsible for this: 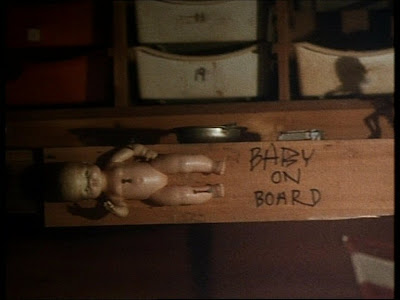 Yes, really. That’s one of the sculptures decorating his secret lair. Sadly, with the property market the way it is, it’ll be years before I get my own secret lair. But, the minute I do, put me down for one of those babies!

So, we’ve established that Mirror Mirror 2 stars both William Sanderson and Mark Ruffalo, which in itself isn’t bad for a low-budget horror sequel. But get this: it also stars Veronica Cartwright, Sally Kellerman, Sarah Douglas and Roddy McDowall. This is B-movie-star heaven, people! That’s a major reason I decided to watch the film – and, believe me, there’s hardly any scenery left after this lot’s through chewing on it.

In slightly disappointing contrast, the main character is played by the rather less celebrated has-been, Tracy Wells, a leftover from 80s sitcom Mr. Belvedere. She stars as young Marlee, a young orphan (aww...) who’s also a dancer (yay!) and who winds up at St. Cecilia’s Orphanage and Retreat, along with her annoying younger brother, Jeffrey. 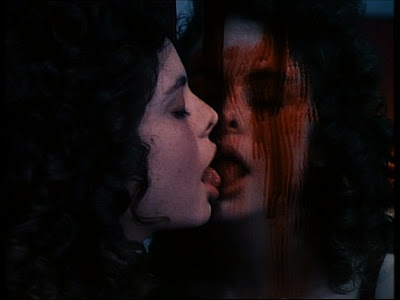 It’s a dark and stormy night and the nuns have taken all the other kids away to camp (nuns + orphans + flimsy tents + a hurricane = comedy gold!) but Marlee and Jeffrey only arrived the night before and have to stay behind until their paperwork’s been filled out. All this is explained by Marlee to the visiting death-metal band, Discipline (or possibly Disciple – I couldn’t quite read the tattoo), who’ve implausibly arrived to play a “charity gig” at the empty orphanage (and retreat).

As rehearsals get underway, one band member discovers an old, ornate mirror hidden away in a closet, and drags it out because, y’know, it’s all gothicky and cool. But he lives to regret it... although not for long, since he and the rest of the band are quickly reduced to charred skeletons when lightning bolts shoot out of the mirror and kill everyone except the two children.

Marlee finds herself temporarily blinded, and laid up in bed at the orphanage in the care of her visiting stepsister (Kellerman) and a doctor (McDowall). Unfortunately, the two are actually scheming to get at Marlee’s inheritance money by driving her insane. Not only that, but there’s a demon inside the mirror that only her younger brother can see! And the crazy blind nun (Cartwright) who lives upstairs is warning everyone that evil forces are about to strike!! Somebody stop the terror before I run out of exclamation marks. 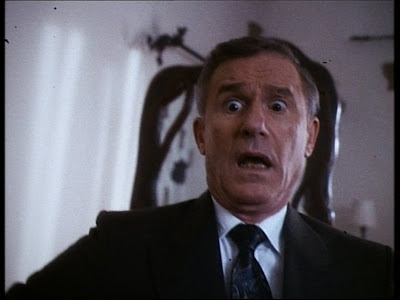 You guessed it, Mirror Mirror 2 has little to do with its 1990 precursor, Mirror Mirror, beyond the fact that I think they used the same mirror. The end credits refer to the film as coming “from the tales of Mirror Mirror”, so the franchise was presumably envisaged as a kind of anthology series. Why it’s subtitled Raven Dance, I’m not entirely sure. There’s a raven in it and, thanks to Marlee’s hobby, a fair bit of dancing, but disappointingly the raven itself never actually dances.

It’s camp value rather than horror that gives Mirror Mirror 2 its zing – or, at least, the small amount of zing it possesses. Roddy McDowall and Sally Kellerman make an engagingly bitchy pair as they plot and connive, the latter ultimately breaking down in a splendid wig-out (“I’m not young anymore... I’m old! OLD!”). William Sanderson downs whisky and sniffs panties as the handyman brought in to scare Marlee into insanity (it very nearly worked on me). And Veronica Cartwright sports white contact lenses and thrashes her cane about as crazy Sister Aja, herself prone to the odd frenzied monologue in a cobwebby corner.

Unfortunately, while setting all the action inside the orphanage makes things appropriately claustrophobic, it also means it all becomes a bit repetitive and dull. What I wouldn’t have given for a cutaway to those storm-battered nuns and orphans away at camp! There’s certainly enough going on but, rather than bring it all together at the climax, the plot hastily kills off its subplots one by one until, basically, there’s nothing left except a rubber demon and a light show. If you want to see something that’ll really scare you off mirrors, try Candyman.