In the Spider’s Web

You show me a scary movie, and I’ll show you a movie that would be even scarier if it was full of spiders!

Jaws, you say? Okay then, how about when Chrissie goes swimming at the beginning... What if, instead of just getting deep-throated by a giant great white shark, she looks up in the middle of being munched in half and discovers that – aieeeee! – there’s a spider in her hair! Yes, not only is she being mangled beyond all recognition betwixt the powerful jaws of the ocean’s greatest predator, but there’s a massive spider all, like, tangled and stuff in her fringe... Eeeewww! 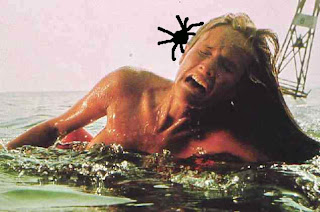 Or what about The Exorcist? So... Regan’s head is spinning round and round and suddenly she starts to spew – but instead of mushy peas, out comes... spiders! And spider eggs! And they’re all totally hatching as they fly out into the priest’s face! OMG, I’m giving myself a panic attack! 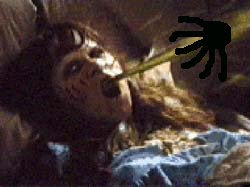 Well, anyway, I think I’ve made my point. And the makers of the new TV movie In the Spider’s Web must’ve agreed, because it looks like they saw the movie Paradise Lost and decided that what it really needed was less credible actors and more CGI tarantulas. (If any of my many American readers are wondering what Paradise Lost is, it’s what we Brits renamed last year’s Josh Duhamel-starring slasher movie, Turistas, because we don’t go in for those foreigny-foreign titles here.)

In Paradise Lost, a group of good-looking kids get lost in the jungle and end up having their organs harvested for sale on the black market. In the Spider’s Web is not dissimilar: A slightly less good-looking group of kids and their guide are trudging through the jungle when one, Geraldine, is bitten by a spider and falls ill. Her fellow travellers quickly fashion a stretcher from bamboo stalks tied together with vines (at least I think they do because they suddenly have one in the next scene) and decide that, since town is too far to trek, they’ll have to carry her to a mysterious nearby village, reputedly lorded over by an American doctor, in the hope that he can help.

The American doctor turns out to be a grizzled-looking Lance Henriksen decked out in crusty yellow nail extensions (at least, I hope they were). And help he does, mixing up a spider juice potion inside his hut... His hut shaped like a giant spider! Dr Henriksen explains that Geraldine has been bitten by a Bolivian Baja spider “unlike any other spider on earth”. Cue various shots of him pretending to handle a tarantula, while a few hastily inserted close-ups show a spider in someone else’s hands. Poor Lance must be a little arachnophobic – not that I blame him – and TV movie paycheques obviously only go so far. Don’t expect to see him in the next series of I’m a Celebrity... Get Me Out of Here! with his lips around a witchetty grub.

Anyway, Geraldine’s condition is now stable thanks to an injection of pure spider blood, so the others decide to leave her there while they head off to town to bring back some doctors who don’t have claws. Two of them discover a spooky-looking cave – a cave shaped like a giant spider! – and head inside. Bad idea... Haven’t they noticed that the spider motif obviously spells trouble? Soon, the entire group find themselves caught up in nefarious plot involving organ-harvesting, swarms of tarantulas, and a villain whose face is hidden behind a mask of spider silk! 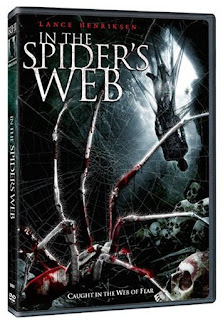 In the Spider’s Web is a Sci-Fi Channel premiere that, like last year’s Abominable and Mammoth, is quite a lot of fun. It’s no Arachnophobia, which as far as I’m concerned still rules the web when it comes to killer-spider thrills, but gets more done in its running time than Spiders and Spiders II put together – probably because it manages to mix in elements of slasher movies, Indiana Jones, the aforementioned Paradise Lost, and most any monster movie you can think of. That’s as well as having characters reference Apocalypse Now and Gorillas in the Mist without actually mentioning the titles of either.

I’m not crazy about the use of CGI when actual spiders are scary enough, but the film has its fair share of real tarantulas and gives the computerized ones some amusing things to do. Even more amusing is the “mix two real tarantulas with five plastic ones” technique, pioneered by Lucio Fulci in The Beyond... although the “mix two real actors with five plastic ones” technique is less successful.

I’m still giving In the Spider’s Web my recommendation, though. It’s not scary in the way that finding an actual spider in your bedroom is scary, but finding the DVD in your player wouldn’t be a nasty surprise either.

Just saw the movie "In a Spider's Web." Found it scary, but some of Hollywood's special effects in the cave were a bit over done. Looks like a lot of gauzy material was used. The spiders looked extremely real and if they are, please leave them in their caves.

Simply the best review ever.

Strangely this movie brought to mind the horror of sitting through "Australia". Just think if the cattle were found dead, next to giant spider hills, hills fill of thousands of funnel web spiders ... I'm thinking we're talking Oscar here rather than a movie most of us Downunder would just as soon forget ever happened.

We'll I'm linking up "Anchorwoman In Peril" on the strength of this review alone. Of course this would be at a blog site than hasn't been put up just yet as I'm too busy reading Anchorwoman reviews! It's a sad and sorry state of affairs.