Twisted Nerve, ladies and gentlemen... or, how did they have the NERVE in 1968 to make a film so TWISTED?

Actually, the title comes from an uncredited snatch of poetry quoted in the film that goes thusly: “No puppet master pulls the strings on high / A twisted nerve, a ganglion gone awry / Predestinates the sinner or the saint”. The notion is, of course, that one’s character and actions can all be traced back to one’s genetic makeup. That’s not a particularly controversial opinion in itself... unless, as here in Twisted Nerve: the Movie, it’s suggested that the mentally ill and their siblings are predestined to be psychopathic murderers.

The main character is Martin Durney (played by the baby-faced Hywel Bennet), a twenty-something university drop-out who’s doted upon by his mother but despised by his stepfather, who regards him as a useless layabout. His brother, who’s been safely packed off to an institution, is what the film calls a “mongol”, but whom we might describe today as a person with Down’s syndrome.

One day, while visiting a toy shop, Martin commits an act of shoplifting that alters his life in two ways. Firstly, he ends up being kicked out of the family mansion in London. Secondly, he meets Susan Harper (Hayley Mills), a guest house owner’s daughter with whom he becomes infatuated. So infatuated, in fact, that it’s not long before he shows up on her doorstep, posing as a mentally handicapped man left with nowhere else to stay by his holidaying father.

Hmm... None of this sounds as downright twisted as it comes across in the film. Try to think along the lines of The Talented Mr. Ripley (published a decade prior to the release of this film and likely an influence) which also features a main character who switches between identities to get what he wants. But then add in the fact that Martin exploits the sympathies of people genuinely concerned for the welfare of someone with learning difficulties, and you’re a little closer to understanding his unsettling motives. 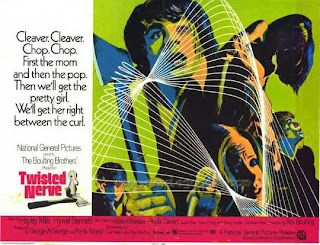 Twisted Nerve builds a lot of suspense on its foundations of truths concealed and trouble brewing. And I mean a lot. Many reviewers seem to have found it tedious and slow, but there’s so much danger bubbling beneath the surface of every situation, every conversation, that I couldn’t look away. Granted, at nearly two hours, there’s a lot of conversation, but Roy Boulting and Leo Marks’s dialogue is dynamite ready to blow – multilayered, full of tension and acid wit.

And the unease is reflected in the sixties London setting too. It’s a fascinating time period, bristling with underlying tension between rigidly defined social classes, races, sexes, age groups – all drawn into conflict here, whether it’s the doctors who constantly refer to an Indian student as “the maharajah”, or the trouble Susan attracts simply because of her attractiveness.

I think Hitchcock would’ve enjoyed this immensely. He’d certainly poach two cast members – the excellent Billie Whitelaw and Barry Foster – for his similar but even more gruelling and repugnant London-set suspenser, Frenzy, a few years later. As in Frenzy, it’s not long in Twisted Nerve before someone winds up dead but, where Hitchcock achieved a morbid, almost casual sense of horror, everything’s a little more shock-horror here. But, when you’ve got the shocks and you’ve got the horror, who’s complaining?