Through the Eyes of a Killer

I’ve a habit of taping films shown in the middle of the night, usually on Movies 24 – or, according to its website, “the first channel completely devoted to movies that have been made specifically for television” (hmm... I always thought that was Five). Then the videos sit unwatched on the shelf until I run out of blank tapes and have to watch something in order to tape something else I won’t watch for six months.

That’s what happened in the case of 1992’s Through the Eyes of a Killer, except that when I went to put it on, it turned out the film was actually showing again on Movies 24 at that very moment! I even toyed with the idea of watching it straight off the TV and – hah! – chucking the tape back on the “blank” pile unwatched. But then I remembered my beans on toast was burning and decided to stick with the recorded version for extra pause-and-rewind-ability. (Alas, no Sky Plus for me.)

But, in a bizarre twist of fate, the cassette turned out to be faulty and my VCR spewed the ruined tape out into... Naw, just kidding! Oh, the potential irony!

So, anyways, I did get to see Through the Eyes of a Killer after all, and it was well worth it too. A pre-CSI Marg Helgenberger (who doesn’t exactly look younger – just less surgically enhanced) plays architect’s assistant Laurie Fisher, to whom we’re introduced via a nice, long tracking shot during which she argues with her boyfriend Jerry (Joe Pantoliano) in their apartment. Laurie ends up storming out, and Jerry ends up punching his fist through a framed photo of her. Ooooh... ominous!

And “ominous” turns out to be today’s secret word, as Laurie is later shown around a potential new apartment by her realtor, who tries to cover up the blood in the bathtub and points out that the walls are three feet thick and soundproof (in this flat, no one can hear you scream). Then there’s the spooky stained-glass eye design in the window pane. It’s almost like someone’s watching you... And it’s also like Someone’s Watching Me!

Ominous or not, Laurie thinks the place could be her home sweet home-away-from-home, and decides to buy and renovate it completely. Of course, she’ll need the help of a builder, and one mysteriously – one might even say ominously – turns up in the shape of Ray Bellano (Richard Dean Anderson). He’s good-looking, muscled, has a rad mullet and, better still, promises to undercut the competitors’ prices by half. Laurie says yes, Ray moves in to start work and, before you can say “Insert rod A into hole B”, the couple are testing out the bedsprings together. Or they would be if the apartment had any furniture.

Anyway, remember how things were all ominous before? Well, during the building work, Ray uncovers a hidden door... leading to a walled-up pantry. “How did you know that was there?” asks Laurie. “I just knew,” replies Ray. Then it turns out that the previous occupier has installed guillotine-like sliding shutters on all the doors. “To keep other people out,” suggests Ray. “Or in...” muses Laurie. Feel my goose bumps. (Hey! Hands off, pervert.)

Just when you think things couldn’t get any more portentous, Laurie opens a fortune cookie that reads: “Don’t build new boat out of old wood”. Is Confucius trying to tell her something? What is the no doubt terrifying secret of her new home? And will all this ominous-ness pay off? The only way to find out is to look... through the eyes of a killer! 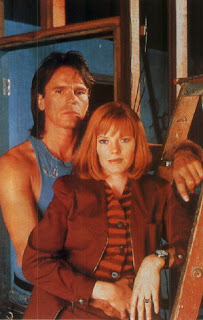 Well, I’ve looked through the eyes of a killer and, let me tell you, it’s pretty scary for an early-nineties TV movie. Call me chickenshit, but there’s nothing like the old “Get out of the house now!” phonecall-from-a-friend routine to send the shivers up my otherwise orthopaedically-sound spine. Maybe it’s because I’m more used to seeing Marg Helgenberger as the kick-ass Catherine Willows in CSI, but watching her helplessly chased round secret passages by a knife-wielding psycho was enough to give me a genuine case of the eek-a-boos. Hell, it was enough to make me use the word “eek-a-boos”, which has to mean... something.

Another major factor in the success of Through the Eyes of a Killer is its classy direction. It’s all long takes and eerily tilting angles – which, coupled with a lush faux-Hitchcock score, give it a cinematic feel not often found in TV movies. Even Tippi Hedren pops up at one point to sprinkle in a few clues. And what great clues this movie comes up with! One of Laurie’s ill-fated friends warns her that everything’s tied up in that creepy fortune cookie message, which seems to make no sense whatsoever but gets cleared up nicely by a trip to the library to look through some old newspapers on microfiche. As for that all-seeing eye in the window pane... well, that goes unexplained, but dammit if it doesn’t pay off perfectly at the climax.

I can’t finish without mentioning another little something that I presume can only have happened by chance but creates a classic moment. At one point, Marg comes face-to-face with a rat for a typical cheap scare. Marg screams in horror – and the startled rodent jumps like hell! Well, anything that scares a rat that bad gets top marks in my book. And I am keeping a book, by the way. It says:

This is an exellent movie! Rick and Marg did a great job with the budget and material they were given.

Oh. My. God. You have a channel dedicated to Made for TV Movies! Wow. You Brits are lucky.

I'm in awe and moving tomorrow!

o my god!!! you are an angel! you have NO idea how long i have been searching for this film. I watched it when i was about 7 when it first came out and I havent ever heard of it since, I have searched on the net for it but could never remeber who was in it or what it was called. Whats even funnier is that i use to watch CSI and Stargate SG:1 regularly and it never clicke with me that that was them!! so thank you for solving one of the biggest mysteries of my life!!!!