There were a few things I didn’t know about Undercover Angel when I picked up the VHS for 99p at a local Oxfam shop, including:

The film’s original title, it turns out, was Angel 4: Undercover. Now that would’ve clued me into the whole series thing. As it was, you have to imagine me standing in the charity shop picking up a video with this cover: 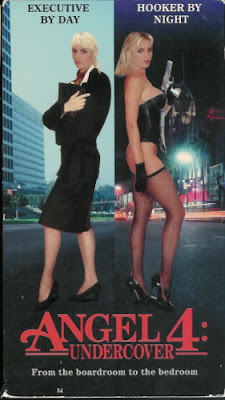 ...except the box I’m holding has been cleverly re-titled Undercover Angel.

How could anyone pass by a movie with the tagline “Executive by day. Hooker by night”? It’s already calling to mind one of my top guilty-pleasure films, Crimes of Passion. Except it looks even sluttier.

I turn the case over to read the back and discover that Roddy McDowall’s in it. Roddy Mc-fucking-Dowall! One of my favourite actors. And, by favourite, I mean that, if he were alive today, this website would probably be called The Roddy McDowall Fan Club. In fact, scratch that... I’d be too busy stalking him to even maintain a website. Anyway, before I know it, 99p of mine is helping build a well in Africa, and Undercover Angel is helping put a spring in my step as I leave the shop and hurry home. I just LOVE helping others!

Forty minutes into Undercover Angel – at approximately the point when the plot finally gets going – it becomes clear that that wonderful tagline wasn’t entirely correct. Angel isn’t an executive by day; she’s a crime scene photographer by day. She doesn’t power-dress and accessorize with a smart leather folder like she does on the front cover; she actually prefers slightly frumpy-looking pastel smocks (1993 was a cruel year for fashion if you weren’t into the whole grunge thing). Not only that, but angel isn’t even a hooker by night; she’s a groupie for a rock band. Now, I don’t demand that movie taglines be 100% accurate but, when they’re going for a half-and-half thing, it’d be nice to get at least one side of the equation right.

The reason Angel’s going undercover as a groupie (by night) is so that she can investigate the murder of an old friend, Paula. Paula actually was a groupie, hanging out with a band called AK-47 and making doe-eyes at lead singer Piston Jones. It’s when Paula’s body turns up garrotted with a guitar string that Angel decides to stop taking pictures and start taking action.

Unfortunately, the term “action” is about as accurate when applied to Undercover Angel as that tagline above. As I mentioned, it’s almost halfway into the movie before the murder even takes place. Until then, we have to contend with various lacklustre subplots involving Angel’s radio DJ boyfriend, and lots of discussion of her prostitute past (of which there really does seem to be enough to fill three previous movies). Luckily for me, I had Roddy McDowall – doing his best Cockney gangster routine as AK-47’s manager – to keep me company. I’ll let you decide whether that’s enough for you.

Just when I was about to give up, however, I sensed things were heading towards an amusing climax – and wasn’t proved wrong. After catfights, screaming, suicide, bodies dangling from scaffolds and people impaled on electric guitars – all set to the awesome soundtrack of a power-rock ballad – I was almost ready to forgive everything. But then I remembered that tagline. 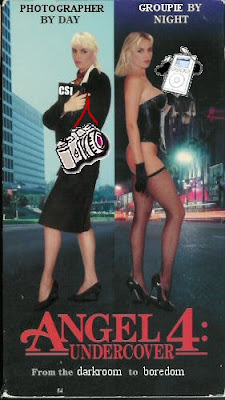 This is the only Angel movie I haven't seen! I mean, Roddy McDowall?!? That's gotta rule all over the joint! I do have to see this, regardless.

Hey, have you seen the first three? It's so funny how the girl in the third one looked like a cross between Donna Wilkes and Betsy Russell! I know, too much free time!